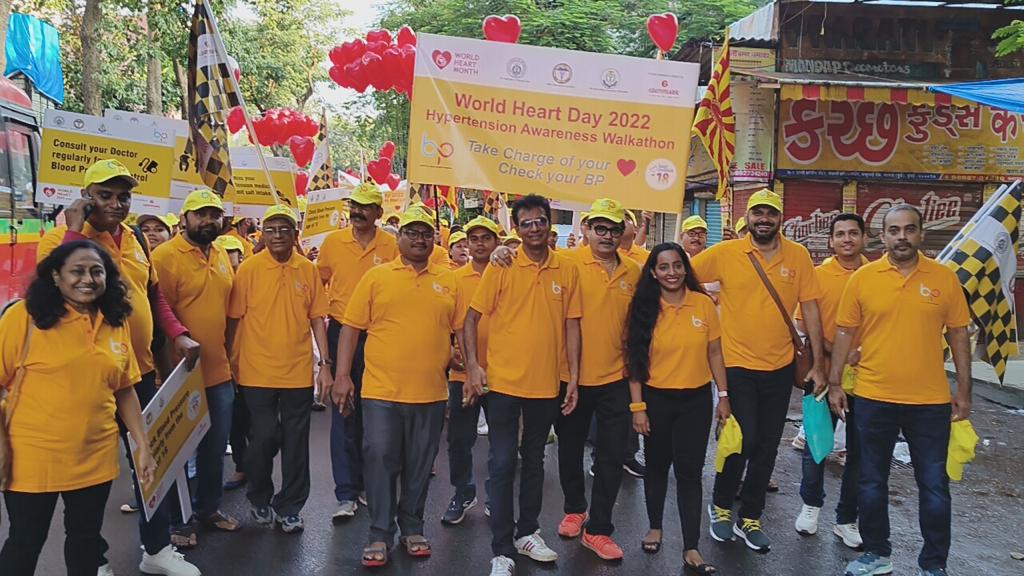 Goemkarponn desk
PANAJI: Glenmark Pharmaceuticals Limited (Glenmark), an innovation-driven, global pharmaceutical company, commemorated World Heart Month in the month of September by organizing 300 Hypertension public awareness rallies and more than 8000 hypertension screening camps across India. The company partnered with more than 8000 doctors and 10,000 healthcare professionals from 42 cities across the country; with the target of reaching out to more than 10 crore Indians. These rallies were organized in association with various hospitals across the country and emphasized on a detailed conversation on spreading awareness about Hypertension and its signs and symptoms followed by a mass hypertension screening camp. While 28 such rallies have been done in Delhi, Kolkata and Mumbai; Chennai and Hyderabad have done 13 awareness rallies.
One such public awareness campaign was organized by Glenmark in partnership with Association of Physicians of India (API), Indian Medical Association (IMA) – Mumbai West region, and Malad Medical Association, at Suchak Hospital, Malad, Mumbai on 25th September. The event was graced by eminent guests including Mr. Gopal Shetty, Member of Parliament, North Mumbai, Ms. Sudha Chandran, popular dancer & television actress, Dr Agam Vora, Honorary General Secretary-API, Padma Shree awardee Dr. Shashank Joshi along with a pool of around 300 doctors. During the event, the world’s first ‘Hypertension Awareness Symbol’ conceptualized by Glenmark was unveiled. This symbol was developed in consultation with 50,000 leading doctors from across India with an aim to raise awareness of the growing burden of hypertension and the need for timely screening; and endorsed by API and Hypertension Society of India (HSI).
Speaking about the initiative, Alok Malik, Group Vice President & Head of India Formulations, Glenmark, said, “This initiative is our endeavor to create awareness about Hypertension in the country. Despite being a prevalent risk factor for cardiovascular diseases (CVD), Hypertension, remains to be a silent killer as majority of patients remain unaware of the condition. As a leader in Hypertension management, Glenmark is committed to taking every possible step in the country’s fight against this disease, which affects millions of people every year.”
Glenmark has been leading from the front in increasing awareness and diagnosis of the disease among the Indian population. Not long ago, the company launched the #TakeChargeAt18 campaign to drive Hypertension awareness and screening of Indian adults above 18 years of age. The company has aims to reach out to more than 200 million Indian adults through multiple channels including its digital platform: www.bpincontrol.in.

Hypertension (high blood pressure) is one of the biggest risk factors for heart disease, stroke and kidney disease. Every third adult in India is suffering from Hypertension- High blood pressure. Currently, it is estimated that 28.1% of all deaths in India were due to CVD, and high systolic blood pressure (SBP) was the single largest contributor (8.5%) to disability-adjusted life years (DALYs). A sustained combination of strategies can shift the population distribution of BP to the left and can help in achieving good control over it.