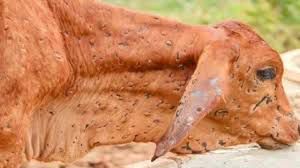 Goemkarponn desk
PONDA: Goa Dairy Chairman Rajesh Faldesai urged Goa Dairy Milk producing farmers to stay alert to prevent the spread of lumpy skin disease among cattle.
He said the lumpy skin disease is spread in other states, with some cattle also dying.
Now some cases are also found in Ponda and other parts. However, long before lumpy cases were reported, Goa Dairy was the first to create sufficient awareness among its farmers on lumpy skin disease spread in Goa.
Goa Dairy veterinary doctors long back printed booklets giving farmers information about lump disease and precautions and vaccines to prevent it.
He said there is also a need for cleanliness so that such diseases do not spread among other cattle.
He said though some cases are reported in Ponda and other areas, the farmers are alerted long back by Goa Dairy, giving booklets with information on lumpy and how to take care to prevent infection to cattle.
He said he had also informed farmers in case lumpy was found in their cases and then inform veterinary doctors.
He urged farmers to stay alert as this is not a simple disease but could spread if no action is taken.
He said the disease spread due to mosquitoes, rats etc.