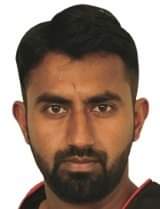 Goa started by winning the toss for the fifth consecutive match and opted to bat. Captain Amit Verma top scored for Goa, remaining not out on 72 from 66 balls – his highest in the tournament – to help Goa post 156 for the loss of six wickets.

Snehal Kauthankar was the next highest scorer with 35 from 30 balls. Darshan Misal (not out on 13 from 6 balls) and Amogh Desai 12 from 15 balls were the other batsmen to cross double digits.

Wicketkeeper KD Eknath – who once again opened the innings for Goa- scored 8 from 6 balls. Lakshay Garg contributed 7 runs from eight balls whilst Aditya Kaushik and Suyash Prabhudesai scored 3 from 6 balls and 1from 3 balls respectively.

Vidarbha were restricted to 140 for the loss of eight wickets in their alloted 20 overs.

The Goan bowlers, once again, did not allow the Vidarbha top order batsmen to settle down with Felix Alemao finishing with three wickets and giving away 27 runs from his stipulated four overs. .Lakshay Garg contributed with two wickets from his four overs surrendering 28 runs in the process. Darshan Misal and Vijesh Prabhudesai were the other two wicket takers.