GOA IS A GIFT FROM GOD: PILLAI 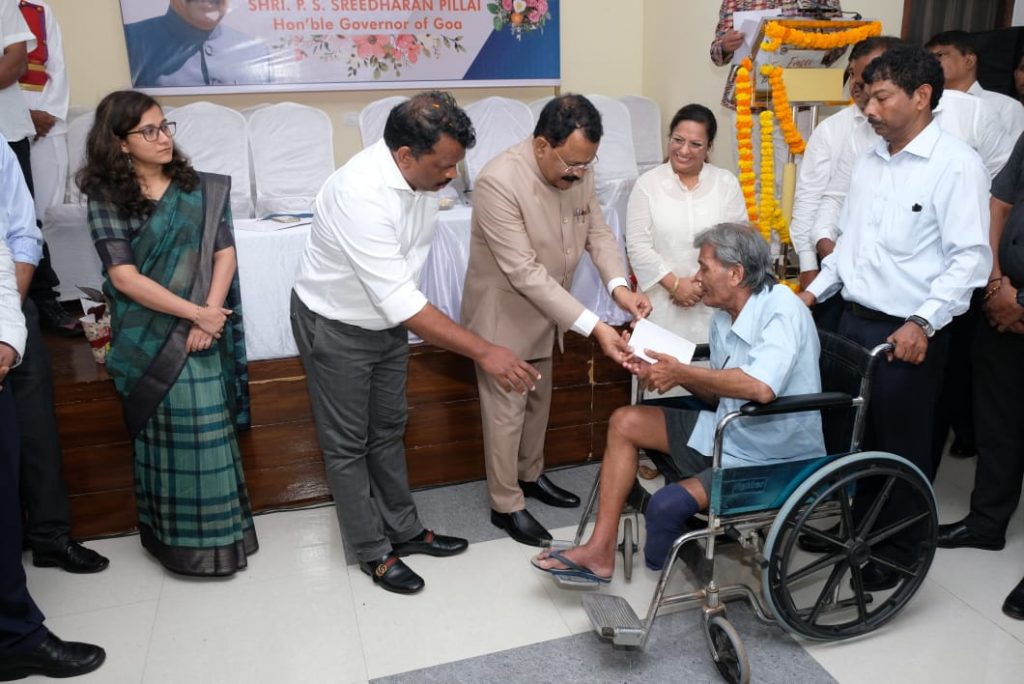 Goemkarpon desk
PANAJI: The Governor, Shri P S Sreedharan Pillai, while interacting with elected representatives of Village Panchayats of Calangute and Siolim constituencies in Bardez taluka today as part of his “”Goa Sampurna Yatra”” said that Goa is blessed with natural beauty and is a gift from God.
He was speaking at an interaction at the Parra Panchayat.
The Governor remembered the former Defense Minister of India and Goa’sGoa’s former Chief Minister, Late Manohar Parrikar, who hailed from Parra. He recalled Parrikar’s contribution not only to the State but to the national leadership as well and said he was an ideal public worker.
The Governor assured the elected representatives that he would look into the issues they were raised and said it’s the bounden duty of authorities to solve people’s problems. Quoting Mahatma Gandhi said freedom in its true sense goes beyond political definitions and means social and economic freedom too.
Earlier, MLA of Calangute constituency, Michael Lobo, said that the Governor was like a mediator between the State and the centre, and as such, Goa was fortunate to have such a Governor who could place Goa’sGoa’s needs before the concerned to get them addressed.
The Governor gave financial assistance to 20 dialysis and cancer patients from the Governor’sGovernor’s discretionary fund.
MLA of Siolim constituency, Smt. Delilah Lobo said that it was a touching gesture of the Governor to provide financial assistance to those in need of such assistance and thanked him.
Present on occasion were Secretary to Governor Mihir Vardhan, retd IAS, and Zilla Panchayat members, among others.
Sarpanch of Anjuna Caisua Panchayat, Shri Das Chimulkar, Sarpanch of Siolim- Marna Panchayat, Ms Sharmila Vernekar, Sarpanch of Siolim -Sodium Panchayat, Ms Deepa Pednekar, Sarpanch of Oxel Panchayat, Shri Pravin Kochrekar, Sarpanch of Assagao Panchayat, Shri Hanuman Naik, Sarpanch of Verla- Cancap Panchayat, Ms Deepali Bicholkar, Sarpanch of Calangute Panchayat, Shri Joseph Sequeira, Sarpanch of Candolim Panchayat, Shri Fermino Fernandes, Sarpanch of Arpora-Nagoa Panchayat, Shri Roshan Redkar and Sarpanch of Parra Panchayat, Shri Chandanand Harmalkar presented memorandums to the Governor regarding issues faced in their villages.
Present on occasion were Additional Collector I, Shri Sanjeev Gauns Dessai, Deputy Collector, Ms Sneha Gitte (IAS) Deputy Collector, Shri Gurudas Desai, administrator of Communidade, Shri Shiv Prasad, BDO-II, Shri Prathamesh Shankardas, among others.
Noted people from Parra were felicitated on occasion. Freedom fighter Shri Ravindra Parrikar, first Panchayat Secretary after Liberation, Babuli Anant, Panchayat Secretary who served in various panchayats for several decades, Cyril Lobo, State badminton champion, Shri Ashmit Parsekar, Khelo India coach, Shri Irfan Khan were felicitated on occasion.
Desmond Oliveira compered the program.
After the visit, the Governor later interacted with Tourism Industry Stakeholders in Sinquerim. Present were Minister for Tourism, Rohan Khaunte, MLA Michael Lobo, Chairman, GTDC, Ganesh Gaonkar, Secretary, Tourism, Ravi Dhawan, IAS; President of Travel and Tourism Association of Goa, Nilesh Shah, Director of Tourism, Nikhil Desai, IAS among others
The Governor said Goa is an apt place for tourism. He said people in Goa are good at heart and are loving people. He said there are no clashes in Goa, and having covered 80 per cent of Goa on his yatra, he can say that Goa is blessed with natural beauty. He further asked stakeholders to explore opportunities for spiritual tourism in Goa.
Earlier, a presentation on ”Current scenario of Tourism in Goa and prospects 2022” was presented. Tourism representatives raised issues like flight cancellations due to e-visa issues, the need to protect Goa’sGoa’s biodiversity, involving locals while considering hinterland tourism projects, completing ongoing infrastructural and tourist projects, safety audits for water sports etc.
Minister for Tourism Shri Rohan Khaunte informed the Governor of the initiatives they are taking, such as
Ease of Doing Business for tourist operators, working on an integrated beach management policy, etc.
Shri Khaunte said the focus is on quality tourism.
He informed of the constitution of the Goa Tourism Board having 50 per cent Government representatives and 50 per cent tourism industry experts.
The Governor, as part of his Sampurna Yatra today, visited the Shree Shantadurga Temple in Candolim, St Lawrence Church in Aguada, the renovated Aguada jail museum and the St Anthony Church in Siolim.