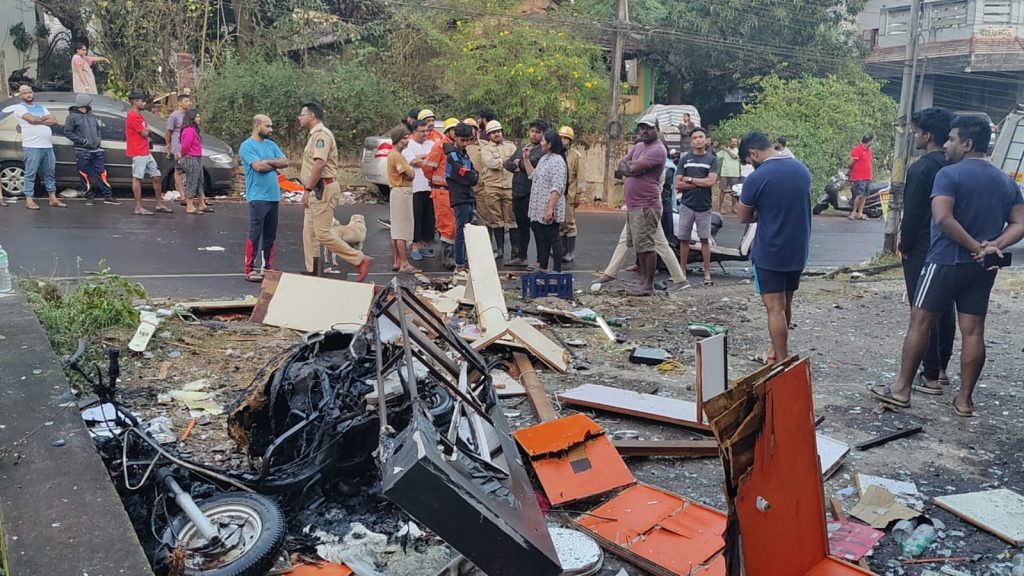 MAPUSA: The Goa Police Investigation into the mysterious blast at Hill Top Resto-Bar at Mapusa has pointed to teh sheer negligence by the owner as the cause of the fire and blast.
A joint report submitted by Paresh Naik, PI, Mapusa P.S.
Jivba Dalvi, SDPO, Mapusa, Bosco Ferrao, Station Officer Incharge, Fire Station, Mapusa, Pandurang Uskaikar, Prop. Loja Porob and PSI Gaurav Naik, Investigation Officer, have ruled out any foul play as alleged by the owner.
“While inspecting, it was found that the rubber pipe connected to the cooking gas cylinder was found damaged with a crack on it, and the premises of the Bar and Restaurant were found to be compact without any ventilation or exhaust,” the report says.
Further, it said, it was also found that a non-standard high-pressure commercial regulator was fitted on Domestic Cylinder. Also, on perusing the CCTV footage, it is found that after the licensee shutting down the outlet, no suspicious movement of any person was found near the premises of the Bar and Restaurant until the incident occurred.
“It is submitted that from the thorough inspection of the premises, it is found that the cooking gas cylinders used were domestic, and the rubber pipe connected to the gas stove from the gas cylinder was damaged, which caused leakage of LPG gas from it,” the report says.
“As it was compact premises, it created a vacuum and thereafter busted as it came in contact with igniting items, i.e. electric switches and liquor, which created a vibrating sound and fire,” teh report adds.