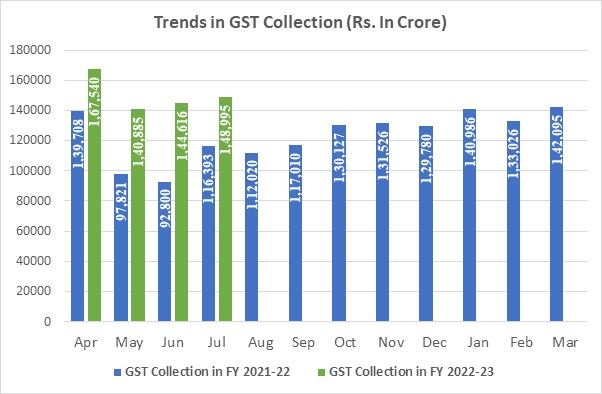 NEW DELHI: The State of Goa has seen a 43 per cent increase in the GST collection for July 2022 as compared to July 2021.
As per the information given by Union Finance Ministry, Goa has collected a revenue of Rs 433 cr in July as compared to Rs 303 cr last year during the same period.
The ministry further informed that the gross GST revenue collected in the month of July 2022 is
₹1,48,995 crore, of which CGST is ₹ 25,751 crore, SGST is ₹ 32,807 crore, IGST is ₹ 79,518 crore (including ₹ 41,420 crores collected on import of goods), and cess is ₹ 10,920 crore (including ₹ 995 crores collected on import of goods).
This is the second highest revenue since the introduction of GST.
The government has settled ₹ 32,365 crores to CGST and ₹ 26,774 crores to SGST from IGST. Centre and the States’ total revenue in July 2022 after the regular settlement is ₹ 58,116 crores for CGST and ₹ 59,581 crores for the SGST.
The revenues for July 2022 are 28% higher than the GST revenues in the same month last year of ₹ 1,16,393 crore. During the month, revenues from import of goods were 48% higher, and the revenues from the domestic transaction (including import of services) were 22% higher than the revenues from these sources during the same month last year.
For five months in a row now, the monthly GST revenues have been more than ₹ 1.4 lakh core, showing a steady increase every month. The growth in GST revenue till July 2022 over the same period last year is 35% and displays a very high buoyancy. This is a clear impact of various measures taken by the Council in the past to ensure better compliance. Better reporting coupled with economic recovery has been positively impacting the GST revenues consistently. During June 2022, 7.45 crore e-way bills were generated, marginally higher than 7.36 crore in May 2022.
The chart below shows monthly gross GST revenue trends during the current year. The table shows the state-wise figures of GST collected in each State during July 2022 as compared to July 2021.