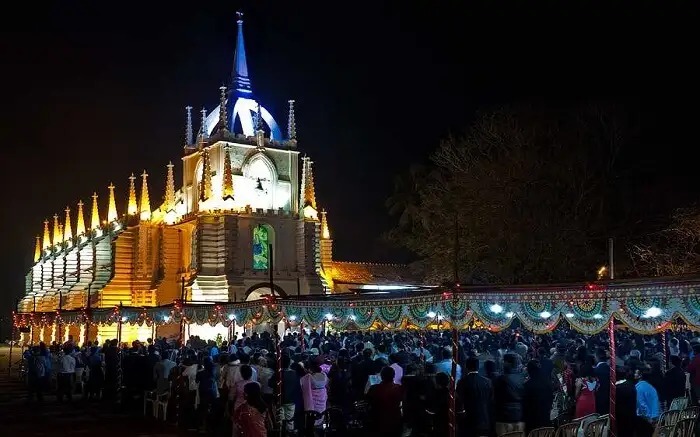 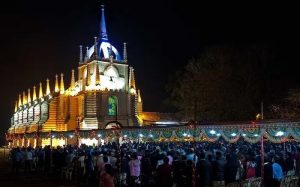 PANAJI: Locals and tourists welcomed the Christmas festival in Goa with prayers and midnight masses and held celebrations throughout the night on beaches and other prominent places in the coastal state.
The festivities began at around 11 pm on Saturday in various churches and chapels and continued till the early hours of Sunday.
At midnight, parishioners dressed in formal attire marked the birth of Lord Jesus.
Goa has a nearly 30 per cent Christian population. This is the first Christmas celebration being held without any restrictions after the COVID-19 pandemic.
At several places across the state, including households, the scene of the birth of Lord Jesus was depicted through beautiful and creatively made cribs and other decorations.
Wishing everyone on occasion, Goa Chief Minister Pramod Sawant tweeted, “Christmas season is filled with warmth and joy. #MerryChristmas to all. May everyone’s life be filled with peace, health and prosperity.” Outside the churches and chapels, people held celebrations all night long on roads and beaches in the state.
A large number of tourists from the country and abroad have flocked to the beach state for the Christmas and New Year celebrations.
A senior police official said additional security force was deployed at different spots in the state to ensure the smooth flow of traffic and to prevent any law and order problems.
There was no report of any untoward incident, he said.
The state police force was also gearing up to ensure smooth conduct of the New Year celebrations, he added.
Goa Tourism Minister Rohan Khaunte said a sizeable number of tourists have arrived in the state for the celebrations.
“I wish them a pleasant stay in our state. The government has taken all steps to ensure they enjoy their visit here,” he said.