Growing cases of chain-snatching in Ponda 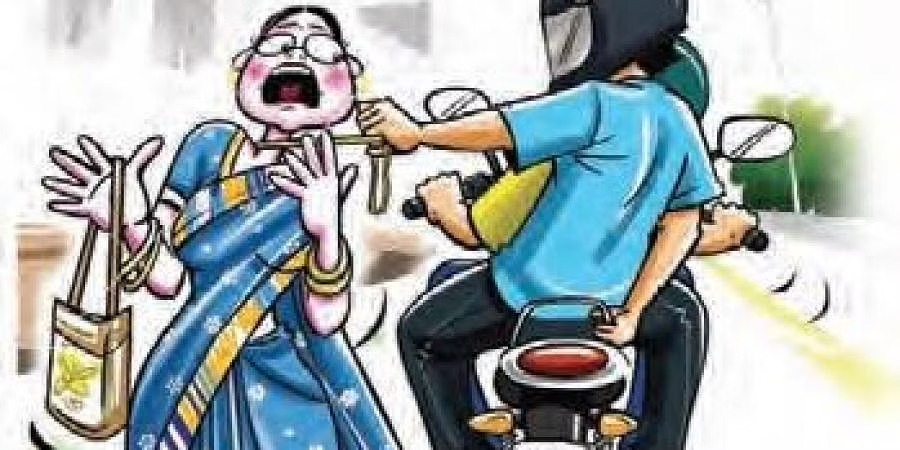 Goemkarponn desk
PONDA: For the past two to three months, there have been growing incidents of gold chain or Mangalsutra snatching in Ponda Taluka along isolated roads.
There was also an incident a girl riding a scooter was stopped at Curti, and her chain was snatched by unknown bikers recently.
The chain snatching or Mangalsutra snatching incidents were reported to Ponda Police from Bandora, Priol, Curti, Borim etc. Yesterday evening fresh case of chain snatching was reported.
Women and citizens from Chirputem Priol area gathered and complained to Ponda PI Vijaykumar Chodankar for increased police patrolling on interiors road to prevent such incidents.
They complained about three chain snatching incidents. Police so far could not detect any chain snatching, although DySP CL Patil said they are investigating the matter and hope to crack them.
In Ponda taluka, cases of stealing gold chains are happening continuously. In the last two months, five such incidents have occurred, and some citizens of Priol have raised the alarm at the police station.
But no arrests by the police yet. Even though they say police are investigating, the thieves are still at large.
The modus operandi is as usual. The bike rider approaches the lady, pretending to be asking for some address, and the pillion rider grabs the gold chain or Mangalsutra from the woman’s neck and flees away on the bike.
Sometimes the driver has a helmet on his head, and the person sitting behind has a mask on his face. Sometimes woman fails to notice the bike registration, or sometimes number plate is fake. In many incidents, women fall down and even get injured.
According to some alert citizens wearing jewellery has become dangerous. So Women should wrap a scarf or Dupatta around their neck while walking alone.
They should also keep a safe distance if a stranger asks for an address. They should note the bike number immediately.
It is convenient to use cheap gold-plated jewellery for daily use and gold on only special occasions to prevent loss in case of chain snatching on the road.
The citizens also suggest CCTV cameras should install on the prime road, and prime junctions.