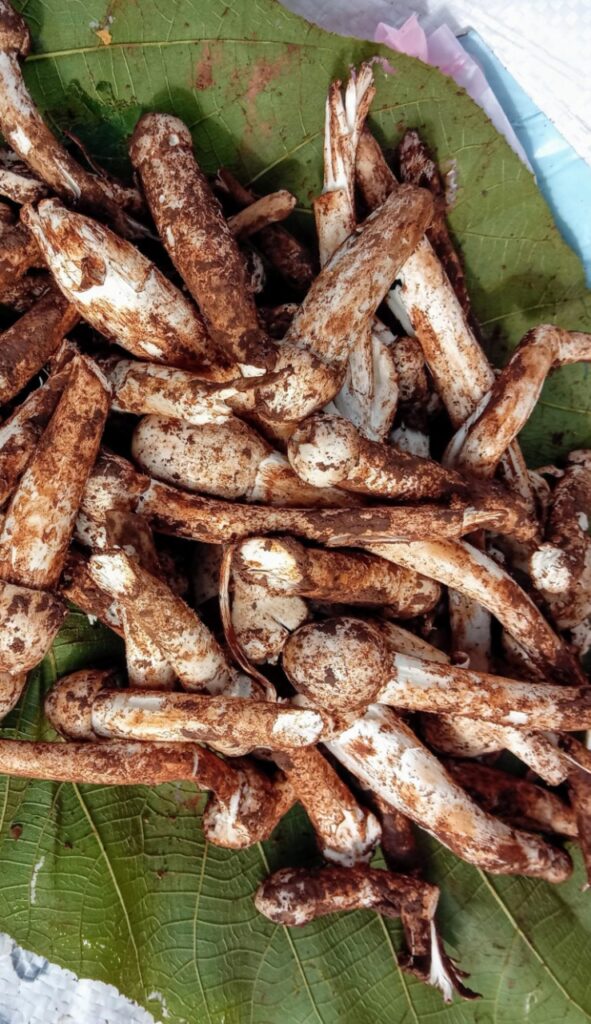 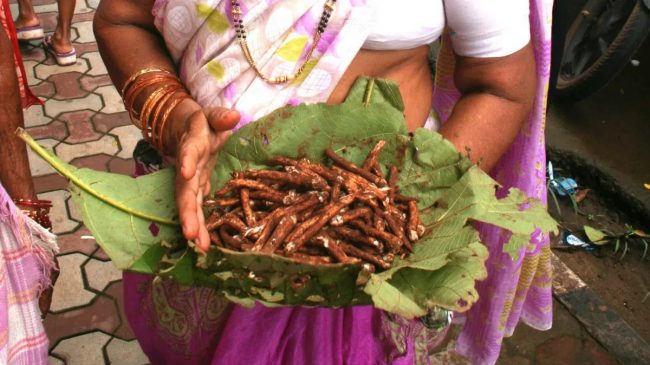 Goemkarponn desk
PANAJI: From July to September, Goa will witness the harvest and sale of ‘Roen Alami’, belonging to Genus Termitomyces cultivated for 120 million years strictly by fungus growing and mound or ‘Roen’ building termites, the seasonal and overexploited wild edible mushrooms, which are being plucked from pristine areas, poached from state government wildlife sanctuaries and from private forests and sold on the roadside and these will appear in major markets at a premium price.
These rare wild species play a very important role as a powerful biodegrading fungus in forest and grassland ecosystems, converting about fifty per cent of dead plant material on the ground into rich fertile soil and releasing micronutrients.
Without this fungus, the termite hills, considered sacred by Goans, can’t degrade dead forest biomass, which they bring inside the mounds to grow this species. Besides, these mushrooms automatically destroy litter, inhabiting viruses carrying vectors hiding in dead organic matter in forests and thus may keep away diseases affecting humans.
Especially ticks which carry KFDV or Kyasnur Forest Disease Virus are spread by Forest ticks found in the litter.
The general public must be aware that, like several crops and fruits which can be cultivated artificially, these species dependent exclusively on their mentor termites cannot be artificially cultivated and produced on a mass scale by humans for their consumption.
Such a task has been considered impossible by scientists, and its universal convention is that wild species which can’t be domesticated need to be left intact in their wild habitats for natural regeneration because market forces overexploit and destroy these gene pools. 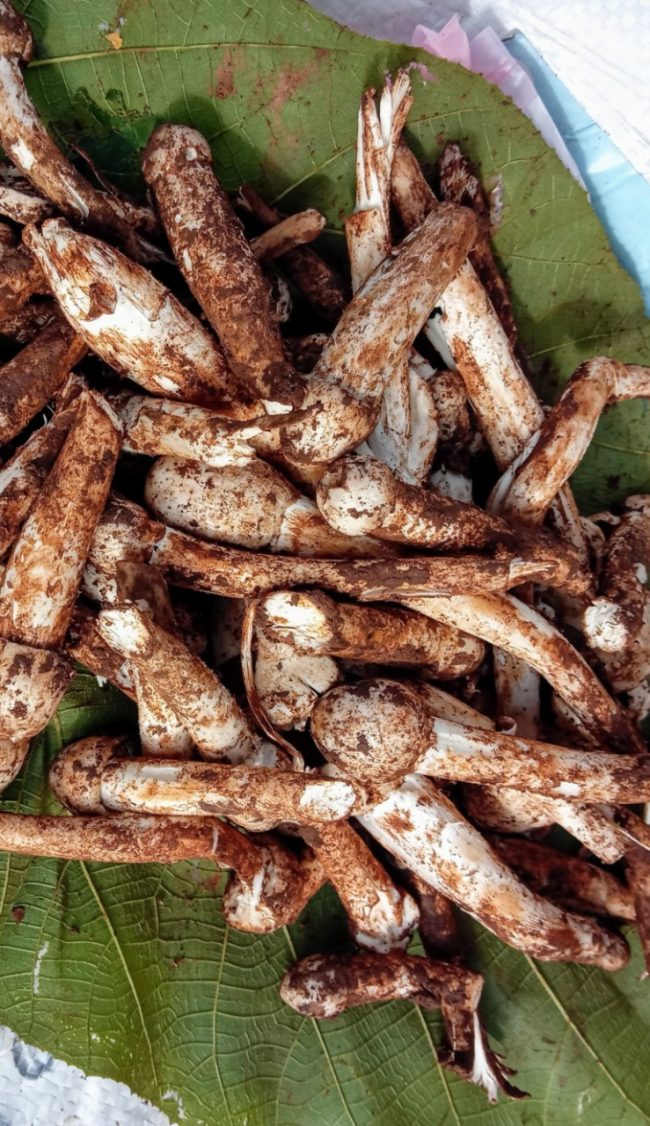 These species have no independent existence anywhere in the world without the termites, which need the mushroom seeds (or microscopic basidiospores) for their own use.
They grow only in association with termites. If there are no termites, no mushrooms and vice versa. If people keep exploiting the Roen Alami, we will lose out on mushrooms and the complex biodegradation-based ecosystem services the termites provide by cultivating the enzyme-rich fungus.
Out of the 90 species found in the World, Western Ghats has 35-40 species, forms and varieties of Termitomyces Mushrooms cultivated by termites. Members of public and local BMCs need to prevent the destruction of termite mounds and in controlled and unregulated plundering of these species.
GSBB fears that overexploitation of these ecologically important mushrooms, considering the very young and immature stages sold in markets, may also destroy the natural quarantines of unknown zoonotic viruses and release quarantined new forest diseases, viz. KFDV.
“We are already battling with viruses, the latest being COVID-19. The fungus must be left intact to perform its role inside the mound as biodegrading dead plant biomass along with dreaded microorganisms and viruses locked up in it,” GSSB says.
World over, scientists are researching these mushroom species to find new drugs and pharmaceuticals and are worried about the overexploitation of rare species. Dr Nandkumar Kamat, microbiologist, globally known expert on Termitomyces mushrooms, PhD guide of Goa University and Consultant, Microbial Biodiversity, GSBB, and authority on wild mushroom diversity of Goa with 35 years of research experience, who has taught virology for 30 years has warned that we ourselves may be responsible for the next pandemic may likely to originate from the Western Ghats if we persist in destroying the forest ecosystem and Termite Termitomyces mutualistic machinery that controls such harmful viruses and other disease agents within the forest ecosystem.
For thousands of years, the ethical principles of forest dwellers had conserved these species as they never thought of marketing them. Local people near forests, and wildlife sanctuaries exploited small quantities and left lots of mushrooms on mounds to mature and spread spores.
They even created legends like termite hills being the abode of snakes to deter outside people from exploiting the mushrooms.
But from 1975, with rapid urbanization, the community conservation ethics changed, and market forces began to exert pressure leading to overexploitation.
People near forest areas could see windfall income from marketing, even in very early and immature stages. The wildlife protection Act 1972 has ensured the protection of such natural mushroom species in local wildlife sanctuaries, but people still enter secretly inside the forests early morning to collect them.
None of them knows the ecological, biological or taxonomic aspects of these species.
There are many poisonous mushrooms which look like Roen Alamis. Therefore all wild edible mushroom consumers need to be careful of samples which could be adulterated with look-alike poisonous mushrooms.
The forest department or FDA have no control over what’s is sold in the name of Roen Alamis. It took decades to ban poaching and marketing of Oliver Ridley turtle eggs and ban catching of bullfrogs sold as ‘jumping chicken’.
Wild Termitomyces mushrooms in forest and grassland ecosystems are as important as tigers. Till the Government consistent with IUCN concerns, recommendations on fungal eco conservation by mycological societies and considering the urgent need to conserve the rich gene pool as India’s precious biological wealth, decides to declare a total ban on the collection and consumption of these precious wild mushrooms from wild habitats in future, GSBB appeals to the educated consumers not to encourage exploitation of such wild mushrooms by purchasing them without understanding their ecological role and instead patronize the much cheaper, more nutritious and cleaner cultivated varieties of button and oyster mushrooms available in abundance in local markets. Pending long term conservation measures, Goa State Biodiversity Board (GSBB) appeals all those involved in plucking, sorting, packing, roadside sale, city market sale to leave behind at least fifty percent young stages on the termite mounds to mature for conservation of their diversity.They must completely avoid plucking and bringing very small mushrooms for marketing. GSBB also request public not to harvest rare smaller species found outside forest and grassland areas. Owners of private forests are also requested to take care of the Roen Alami species and conserve them. These include varieties locally known as khut or khutyali olami, toshali olami, sonyali olami, chonchyali olami, scientifically known as Termitomyces clypeatus. People must also not overexploit non-marketed smaller species of Termitomyces microcarpus, locally known as Shiti, shitol olami found at end of monsoon. Leave behind fifty percent of these Xiti olamis to mature and decompose and release spores. Currently, consumers are craving ethnic food, so it is a temptation for many to make windfall income without returning anything to nature. The whole world is now sensitive to anything that can’t be cultivated and considered as sacred by our past traditions; precious Roen Alamis of Goa need to be seen as blessings of Earth Goddess Santeri worshipped in Goa, Konkan and western ghats and accordingly treated with respect. Already Goa has lost 14 Termitomyces species since 1986 due to overexploitation. The rest 16 wild species are at the mercy of local consumers. GSBB is the only statutory agency in India which has been issuing such appeals every year in the interest of conservation of Precious gene pool of Termitomyces species in public and national interest.