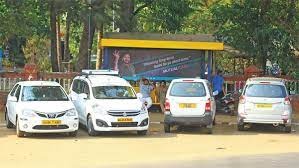 Goemkarponn Desk
PANAJI: The High Court of Bombay at Goa today refused to grant interim relief to Contract Carriage Cabs from installing digital meters.
However, the High Court has admitted the petition but has asked petitioners to install digital meters without any prejudice in accordance with law.
Advocate General (AG) Devidas Pangam during the hearing opposed any relief to cab operators claiming that taxi owners sometimes charge exorbitant fares.

Earlier, a division bench of Justices M.S. Sonak and Nutan Sardesai, also directed the Goa government to file an affidavit stating why the Court should not proceed against it for contempt, after state authorities failed to install the digital meters by the August 1 deadline.
“Prima facie, we are satisfied that the Respondent (State Government) is in contempt of this Court. There are clear directions in our order dated July 5, 2019, which were in fact made on the basis of the statement made on behalf of the state government in the matter of implementation of Automated Tracking Device with integrated emergency system and fare meter in passenger taxis. The project was to be implemented from August 1, 2019 on a regular basis,” the division bench had said in its earlier order
Goa’s taxi sector, which comprises of around 30,000-odd taxis, has been on the receiving end of criticism from tourists, civil society as well as the major tourism and travel industry stakeholders, for functioning without meters or fixed tariff.