Goemkarponn desk
CANACONA -A highly decomposed Sea-Turtle washed ashore on the Agonda beach shore on Wednesday.
The fully decomposed and its Shell vertically opened was later taken in custody of the Forest department (Padi Range) and, after the proper examination, was buried in a specially dug Put right on one corner of the beach at Agonda.
According to the forest officials who took up the exercise to dispose of the carcass, the female sea turtle was small in size but of the specific species of an endangered Olive Ridley. It was killed after being caught and injured in a fishing net. The carcass is more than five days old, and its Hard Shell was almost vertically broken open due to a prolonged period since it’s dead, informed an official supervising the disposal exercise.
Some fishermen noticed the dead sea turtle being washed ashore at the Southern end of Agonda beach and alerted the life-Savers personnel, which in turn informed forest (wildlife) officials, informed sources. 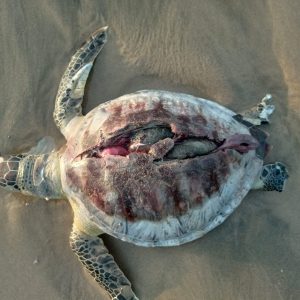