I am next to CM in Govt; no development can happen without my consent: Tawadkar 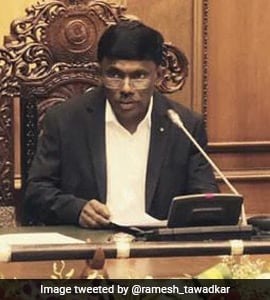 CANACONA – Stating that he is one of the two in the Government, GLA Speaker Ramesh Tawadkar told Agonda residents no works he proposed can be rejected and to bring maximum proposals to his attention.

Tawadkar even asked the residents to bring 5 major projects/proposals in the first year, even to the extent of 5- 30’crores of rupees, and he will get it done for the people of Agonda.

Speaker Ramesh Tawadkar, who attended the 1st Gramsabha of the new Panchayat at Agonda briefly, later addressed the residents soon after Sarpanch Fatima Rodrigues adjourned the Gramsabha and invited Tawadkar to address the villagers who came in large numbers to participate in the Gramsabha on Sunday.

Expressing his concern for the overall development of Agonda village, informed the villagers that something good would happen this time in Agonda and that people have kept their faith in the newly elected Sarpanch and Panch members, and asked the panchayat to study all the issues raised by members and accordingly solve them all.

“My full cooperation is with your panchayat. ‘I am next to Chief Minister; if I say No, development won’t happen. But there’s no question of saying no, and whatever works are there, proposals will go through me, and it will be done without fail. I will make most of the post of Speaker to derive maximum mileage on development to Canacona ‘, Tawadkar told the gathering amidst wild applause.

Tawadkar also called for forming 50- members or inducting even more people into the village committee to identify, pursue and oversee the completion of various works/proposals needed in the village. Let all intellectuals and social workers jointly work to uplift the village.

Stating his concept is panchayat is a government NGO, Tawadkar mentioned Mission and Vision will function on the same concept with the local bodies.

Reacting to members’ demands earlier in the Gramsabha, Tawadkar assured to commence Underground laying of Power cables in Agonda in the next 6 months, and solve low voltage, voltage fluctuations and assure 100 % uninterrupted power supply.

“43 Crores have been approved for Underground cabling works, tender for which will be finalised in the next 3 months and works should definitely start after six months, but certainly before the end if 1 year period.

Water supply is a serious problem, Inspite of having two dams in Canacona. Gaunem dam, completed in 2017, has not seen any progress for the last 5 years, and I have taken the WRD officials to task over its delay in commissioning. After seeking details of the last 5 years’ expenses by WRD in Canacona, which they informed ‘Nil’, I even asked the Director to close both WRD sub-divisions functioning with 1 AEV, 4:JEs and 42 Staff to close down in Canacona and fix the responsibility as to who is responsible whether the AE/JEsvat Canacona or top bureaucrats sitting in Panjim for not expending a single rupee in Canacona during last 5 years. Chief Secretary has sought 8 days time ‘, Tawadkar informed.

Tawadkar also informed only 350 big trees amidst the overall total of 2632 Nilgris, Teak, Matti, trees that are going to be felled at the Karmalghat section if a 45 m 4-Lane road is taken for construction, against the previous assumption of 13 thousand trees. Though the previous figure of 13K was twice authenticated, environmentalists who have objected to such a high figure will be suitably addressed and convinced to begin the process within 3-4 months and commence the actual works between 6 months to a year.

Tawadkar also asked villagers to not only pay thrust on developmental works but look beyond development ensure participation in Educational Sector, Healthcare and see even the last person in the village is taken care of or looked after.’ Ac of each tourism stakeholder before it local or outsider should be guaranteed.