In BABA RAJ, employees have no RIGHT TO PROTEST

Termination order issued by WCD says Anganwadi workers violated rules by protesting, have no right to demand regularisation, nor can they demand civil posts 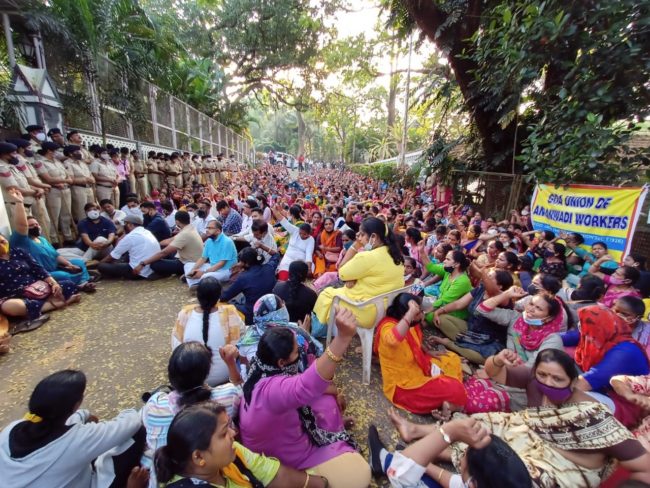 PANAJI: In inhuman treatment, the Department of Women and Child – headed by Minister Vishwajit Rane, terminated the services of seven Anganwadi employees last April merely because they formed a new union and protested for their rights.
The order issued by Deepali Naik, Director & Ex-officio joint secretary DWCD, on April 1, 2022, reads, also says the Anganwadi workers have no right to protest, have no right to demand regularisation, nor can demand civil posts.
“As intimated, inter alia, in the letters of the Government of India, Ministry of Women & Child Development, from time to time, and vide recent letter dated 08/12/2021, the Anganwadi Workers/Helpers are Honorary Workers who come forward to render their services in the area of childcare and development on payment of monthly honorarium,” the order by WCD director says, copy of which is in possession of Goemkarponn.
“Anganwadi Workers being honorary workers can neither be declared permanent servants nor can be given
any civil posts: hence they are not eligible for related benefits,” said the order.
Further, it says two Unions viz. Akhil Goa Raja Karmachari Sanghatana and Goa Union of Anganwadi workers and both the Unions have separately inwarded their letters in the Directorate, thereby creating confusion as to which Union has been actually representing the Anganwadi Workers.
“The newly formulated Union has been formed so without the knowledge or approval of the Ministry and Directorate of Women and Child Development. The newly formulated Union has neither submitted any documentary evidence to justify their locus standi at the time of submission of their demands nor in the near future,” it reads.
The Director said the monthly honorary workers/helpers appointed under the Centrally Sponsored Scheme, and besides this, the State Government/Department
had taken utmost care to provide maximum benefits to these Workers/Helpers.
“The new Union placed the below-mentioned demands, which were already taken up by State Government/ Department. Status of the demands were intimated to AWW/A WH were as follows:-

Demand No.1: Treat Anganwadi Workers and Helpers at par with Government employees.

Demand No.2: Enhancement in remuneration

The Anganwadi Workers/Helpers are already given periodic increments after completing every five years of Service since joining. This is an initiative of the State Government.

Demand No.4 : Seniority increment
The Anganwadi Workers/Helpers are already given
periodic increments after completing every five years of Service since joining.

Demand No.5: Pension Scheme
As intimated by the Ministry, all Anganwadi Workers/Helpers are eligible under the Pradhan Mantri Shram-Yogi Maandhan (PMSYM), Atal Pension Yojana.

Demand No.7 : Nominee
The Department had already submitted the proposal for the Nominee to the Finance Department for approval.
The status of the demands 6 & 7 was intimated to the Anganwadi Workers/Helpers during the Felicitation programme held on 18th December, 2021 and it was requested to the Anganwadi Workers/Helpers not to cause any agitation.

Demand No.9: Equal Pay for Equal Work
The Department is taking all measures to pay additional remuneration to Anganwadi Workers/Helpers as and when a job is entrusted to them.

Demand No.11: Absorption in Government Department
Promotional benefits to the post of Anganwadi Workers are available to Anganwadi Helpers. 50% reservation quota for recruitment for the post of Mukhya Sevika (Lady Supervisor) is available in the State.

Valpoi: In a tragic incident, a 10th standard students from Pal Thane, Sattari committed suicide this morning as the parents failed to meet his demand ... Read More

Goemkarponn desk MARGAO: Drones are the technology of the future. Although the most commonly seen drones are being used only for photography, there are other ... Read More

Goemkarponn Desk PANAJI: Fearing spread of COVID-19, several village panchayats and municipalities have decided to remain under lockdown for the next 8 days as a ... Read More