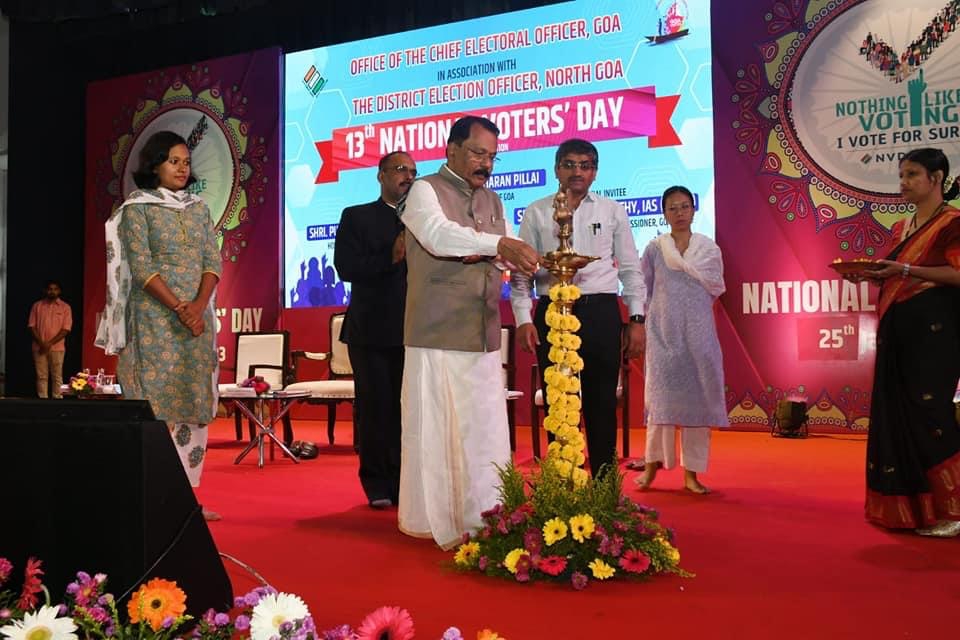 PANAJI: The office of the Chief Electoral Officer Goa, in association with the District Election Officer, North Goa, celebrated the 13th National Voters Day and, to mark the same, organised a function at S.Z. Qasim Auditorium of National Institute of Oceanography, Dona Paula, today.
The Governor of Goa, P. S. Sreedharan Pillai, was the chief guest for the function. The celebration theme was  ”Nothing Like Voting, I vote for Sure”.
The Governor, while addressing, said in a democracy, people are supreme, and so also their right to vote. Seventy years ago, the founding fathers of the Indian Constitution gifted the “Election Commission of India” to the citizens of this country. This day has been dedicated to the empowerment of all voters and to creating awareness among all electors, for their participation plays a major role in strengthening Indian Democracy. The Election Commission of India has come up with a theme of ‘Nothing like Voting, I vote for sure’, which is a wonderful theme for the State to achieve the goal of 100% voting.
The Governor said we intend to build an entire generation equipped with knowledge of electoral participation, democratic principles, ethics and morals, which will help make a social fabric based on righteousness and conscience. This generation will be aware of their duty towards their nation as vigilant and responsible citizens.
The Governor speaking further appreciated the efforts of the office of CEO Goa for introducing various innovative measures in voter education through breakthrough measures ranging from inclusive games, contests and competitions involving inspirational and motivational activities giving positive messages. Pink Polling Booths, wholly operated by Women officials, were setup across various constituencies in Goa during the Goa Legislative Assembly Elections 2022, he pointed.
He said the National Voters Day pledge we all took is echoing from every corner of the State as well as the country. The oath is to promote and protect our beloved democracy by taking part in free, fair and peaceful elections. He appealed to all the voters to participate in strengthening our democracy and to work together to make every election free, fair and friendly.
The office of the Chief Electoral Officer to recognise the services of those who have worked to make the elections process successful were felicitated with awards under different categories.
In the Special Recognition award category, Padmashree, Brahmanand Shankhwalkar, Ms Bhakti Kulkarni has presented awards at the hands of the Governor,  Special Award for a contribution towards Electoral Process District Election Officer, North Goa & South Goa were conferred on  Collector North Goa Smt. Mamu Hage IAS and Collector South Goa, Smt. Jyoti Kumari IAS.
The best Electoral Registration Officer (North & South Districts were presented to Rohan Kaskar Dy. Collector & SDO Bicholim ( N) and Shri A. Ashwin Chandru, IAS, Deputy Collector and SDO, Sanguem.( South ).
The award for best Assistant Electoral Registration Officer (North & Districts) was presented to Shri. Anil Rane Sardessai, Joint Mamalatdar –I and Shri Gaurav Gaounkar, Joint Mamlatdar IV, Salcete (South). In the special recognition category   Shri Narayan Sawant IAS, Smt. Sangeeta Naik and  Shri Shri Pravin Gawas were given awards at the hands of the Governor.
National Voter Awareness Contest conducted by ECI across India – Slogan Contest category was won by Ms Preitty Sharma, which carried a Cash Prize of 20,000/- and a certificate.
Those who were felicitated at the hands of the Chief Secretary recipient of awards were Director of Higher Education Prof Gervasio Mendes and AIO Dept. of Inf. & Publicity, Shri Kiran Munankar,  in the category of State Icon, the recipients of awards were Shri. Taha Haziq, Shri. Tapan Acharya, Ms Sonia Sirsat etc.
While in the category of SVEEP Nodal Officer (North & South ), those who were awarded are Director Higher Education Prof Gervasio Mendes and Director Women & Child Ms Deepali Naik. Special Recognition awards were presented to Shri Sudesh Gaude, AIO Dept. of Inf. & Publicity Shri Kiran Munankar.
The best Booth Level Officer (North District ), Female Ms Elizabeth D’costa, Best Booth Level Officer (North District ), Male Shri Nilesh Bharat Naik, female ( South ) Ms Milagrine D’costa, female ( South ) Shri Veerappa Timmappa Aribenchi.
Special Recognition awards at the hands of the Chief Electoral Officer  were presented to the Superintendent of Posts, All India Radio, Doordarshan Kendra, Panaji, Kadamba Transport Corporation Ltd, Goa Tourism Development Corporation, Indian Institute of Technology, Goa, Josephine Fernandes (Indian Sign language Interpreter), Infotech Corporation of Goa Ltd.,
National Voter Awareness Contest conducted by ECI across India – Slogan Contest category, Special mentions award were bagged by Shri Viddesh Ghadi, Ms Naaz Mohammad Bepari etc.
Students of Goa Kala Academy performed street plays to impress upon the importance of voting.
Chief Secretary, Puneet Kumar Goel, IAS, State Election Commissioner, Shri W. V Ramanamurthy, IAS ( Retd.); Secy I& P, Shri Subhash Chandra IAS, Addl. CEO Shri Sunil Masurkar was among those who attended the function
Chief Electoral Officer Goa Shri Ramesh Varma IAS earlier welcomed the guests and thereafter administered the pledge of the vote.
Collector North Goa Smt Mamu Hage IAS proposed the vote of thanks.