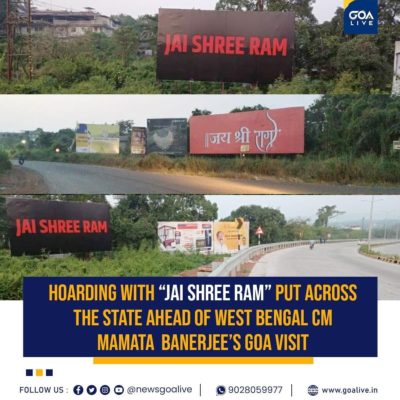 Goemakrponn desk
PANAJI: A day when the West Bengal Chief Minister Mamata Banerjee’s lands in Goa, ‘Jai Shree Ram’ hoardings were seen across the coastal state to welcome her.
It is being alleged that the BJP is involved in the campaign to irk West Bengal, a claim denied by the party.
“We are certainly not involved in the hoardings issue,” a BJP office-bearer said.
The development comes close on the heels of several hoardings carrying pictures of the Trinamool Congress president who were defaced in Goa ahead of her visit. Condemning the act, the TMC claimed it reflects the BJP’s “intolerance”.
A fresh war of words erupted between the BJP and the TMC, after the saffron party on Sunday claimed the Goa unit of the Trinamool Congress posted a cartoon on Twitter that showed party supremo Mamata Banerjee trying to crush Prime Minister Narendra Modi, Union Home Minister Amit Shah and Goa Chief Minister Pramod Sawant under her foot.
A statement by Goa CM Pramod Sawant’s office claimed the tweet by the Banerjee-led party was deleted immediately.
After the image was shared by TMC, a number of posters and hoardings, put up by the TMC, carrying pictures of Banerjee were vandalised.
Talking to the reporters, TMC’s Rajya Sabha member Derek O’Brien said, “The only woman chief minister (in the country at present) has been insulted. We all know this is not the culture of Goa.”
He also claimed the BJP was damaging local businesses, as contractors would have to pay from their own pocket for all the vandalised hoardings.
Referring to the 10-point charge sheet released by the TMC against the present BJP government in Goa, Derek said that if the BJP wants to fight against his party, then it should do it politically.
“Why don’t you respond to the charge sheet placed before the public,” he added.
Former Goa governor Malik had accused the state government of corruption during the COVID-19 pandemic and alleged he was removed from his post for sharing this.

Goa will have great tourist season this year: CM Sawant