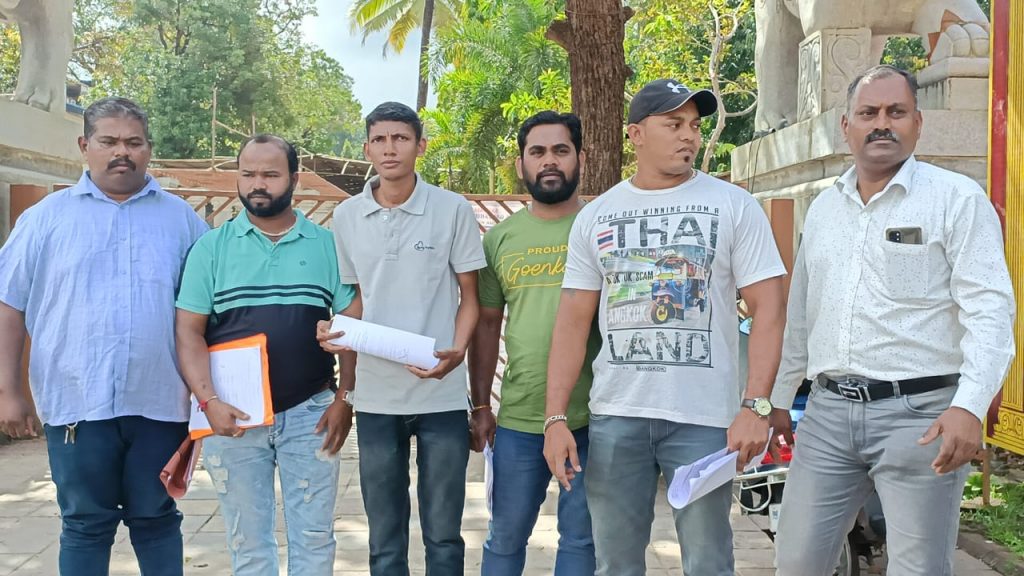 Goemkarponn desk
PONDA: The villagers of Kundaim including Naresh Gaude, Vijesh Naik and others addressing to media today at Kranti Maidan, Ponda, urged the local MLA and Power Minister Sudin Dhavlikar to support them in their agitation for saving the communidade land at Kundaim for future generations.
The locals said since 2010, they have been agitating against Kundaim communidade, allotting 36000 square metres of its land to Karnatak-based Chitrapur Mutt at Kundaim plateau.
The locals reminded Power Minister that in the past, they had opposed allotment of land to Chitraput Mutt, and local MLA Sudin Dhavlikar, in February 2010, had opposed land allotment to big institutions and even had written a letter to then CM and North Collector asking awarding of land to Chitrapur Mutt may be kept in abeyance.
Vijesh Naik reminded that the same support is needed now from Minister.
Further, the locals said they had approached HC stating that mutt construction is not according to the construction licence by Kundaim Panchayat, and locals had opposed granting occupancy for violation. The HC had directed Panchayat to inspect Mutt and complainants( locals), which the Panchayat had failed, said locals.
They said the Mutt had asked construction licence for a farmhouse but constructed a residential building by violating the permission of Panchayat hence opposing granting occupancy to the Chitrapur Mutt.
According to locals, there is a shortage of land for locals in Kundaim. The locals had earlier demanded 450 plots for housing, but this demand is sidelined. The locals are opposed to granting allotment of land to bing institutions that will not benefit to locals of Kundaim.
Vijesh Naik said those supporting Chitrapur Mutt should show how these Mutts benefit locals.
He said locals are not even given entry in said Mutt.
Meanwhile, it is learnt that Kundaim Panchayat had already issued an occupancy certificate to Chitrapur Mutt based on TCP clearance. The locals said that the reinspection of Chitrapur Mutt was not done per HC directions. The complainants( locals) were not notified to remain present during the TCP inspection as per the Court’s direction.