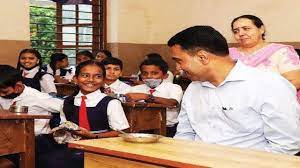 PANAJI: The Education Department today in a circular has increased the rates of mid day meal scheme from Rs 6.10 to Rs 8.

As per circular, the rate has been increased to Rs 8 for Pre-Primary & Primary level and Rs 10 for Upper Primary Level.

Chief Minister Pramod Sawant said the government has decided to increase the cost by Rs 1.90 per child per day, as requested. “But, the hike will be applicable provided the SHG assures that there will be no compromise on quality of food,” he said.

Sawant, who is also Education Minister, said there have been complaints that at some schools, the quality of food supplied to students is not as per government norms. “I am clear that at some places no good meal is provided to the student it should not be that only 50 per cent of students eat the meal,” he said.

Currently, the average unit cost per child per day is Rs 6.11 for pre-primary and primary students while for upper primary it’s Rs 7.45.

Earlier Goa Forward Party had demanded to increase the rate and had threatened to approach High Court over the matter.

he Goa State Commission for the Protection of Child Rights has come across a news report regarding mid-day meal issues in Goa.

“This is worrisome, and the government should try to prevent this. The government’s mid-day meal scheme aims to provide food to young school-going children, ensuring the protection of their right to food and education,” said Peter F. Borges, Chairperson Goa State Commission for Protection of Child Rights in a release issued here.

The release says the whole idea behind MDMS since its conception in 1995 has been to provide nutritious food to all the children in schools, in order to improve both their nutritional status and their attendance.