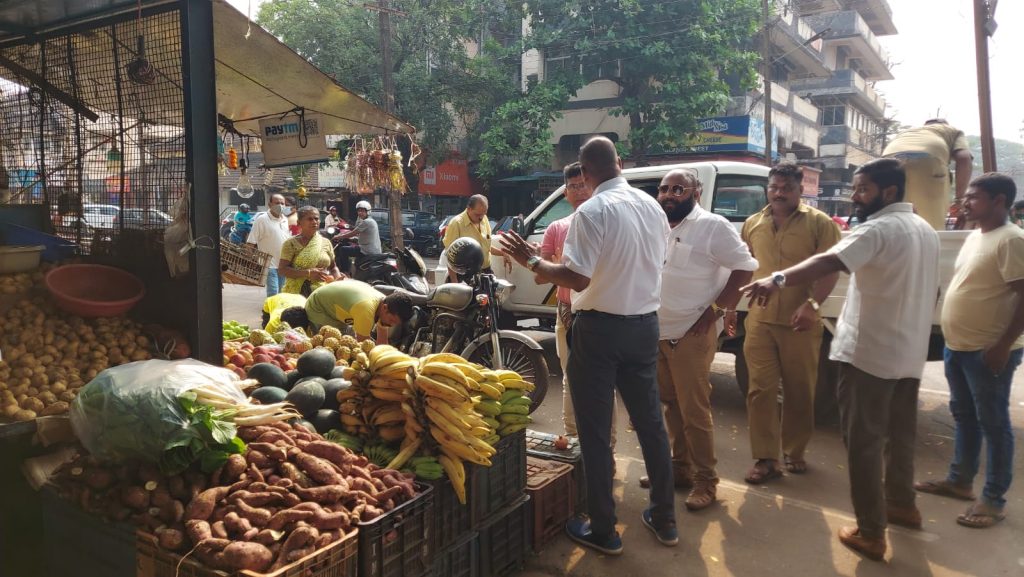 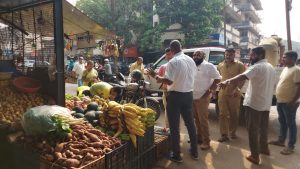 Goemkarponn desk
VASCO: Mormugao Municipal Council ( MMC ) on Tuesday morning, along with councillors, market committee president and police staff, carried out an anti-encroachment drive in the Vasco vegetable market
The MMC inspectors and labourers were seen confiscating all the goods, including fruits and vegetables, placed on the roads and loading them in MMC vehicles.
The drive lasted for over two hours, and two vehicle loads of goods were confiscated by the MMC during the anti-encroachment campaign.
Speaking to the media, MMC Chairperson Leo Rodrigues said that the confiscated goods would not be returned to the vendors but instead offered to orphanages and old age homes.
“We have warned these vendors several times and even sent them notices with a request of seven days, but these vendors don’t seem to pay heed. We waited for ten days and finally, when we received many complaints, we had to act and carry out this drive. We have seen that the stalls are empty, and their goods are on the road, which causes public obstruction. There has to be some humanity and some respect for the council, and if they don’t care about our requests and warning, we will have to initiate strict action though we don’t want to do it. We have now used the police force to clear the road inside the market, and we are thankful for their support to the council. We will now draw a marker white line to know the maximum area they can use outside their stall, and we will start fining them if their goods are beyond the line,” said Rodrigues
“We will carry more such drives in the future to keep a tab on these encroachments to ensure that there is no congestion and people are not inconvenienced. These people think they will get good business if they keep their goods on the roads, and we appeal to people not to entertain the vendors who have their interests on the roads. We will not return the confiscated goods but offer them to orphanages and old age homes,” said Rodrigues.
MMC Vice Chairperson Amay Chopdekar said that this was one of the many attempts taken by the council to warn the vendors
“We have taken many drives that began with awareness, requests and warnings. We even sent them a final warning notice, but the vendors did not care, and they continued to keep their goods on the roads; this caused a lot of congestion, and people could not even walk. We have now decided to initiate strict action because, despite the warning that we will come, they seem to ignore us. We will now have marker lines and issue then fines and continue such drives regularly,” said Chopdekar
MMC councillor and Market committee president Vinod Kinlekar said that MMC was not against the vendors, but they would not tolerate encroachment and congestion in the market.
“The MMC, along with the Market inspectors, are frustrated with several requests to the vendors, and people are questioning our silence on the market encroachment, and this has led us to take this drive,” said Kinlekar.