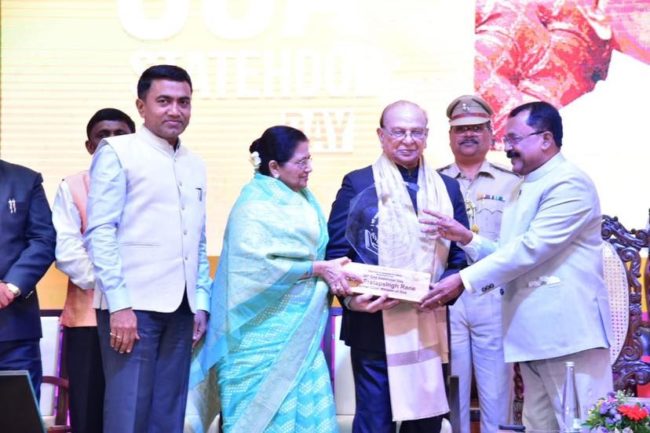 PANAJI: Governor of Goa P.S. Sreedharan Pillai indirectly pointed out at former Leader of Opposition Digambar Kamat said that the Opposition should know facts before commenting or making a statement.
Pillai was speaking on the New Raj Bhavan building issue during his address on the occasion of 35th Goa Liberation Day.
“PM Modi, President of India and CM Sawant will look into funds required for constructing the new Raj Bhavan building; Mizoram Governor’s palace was built using centre’s funds,” said Pillai.
Pillai said that the Opposition should know facts before commenting and that such an approach is not good for democracy.
The Governor also suggested an in-depth study of communal harmony in Goa and the continental system of jurisprudence which was followed in Goa till 1961.
“I am happy to state that the prestigious International airport at Mopa is scheduled to be completed by August 2022 at Rs.2615 crore. The six lanes express highway from NH66 to the airport, covering a distance of 6.5 km and involving a cost of Rs.769 crores is under construction,” he added.
Governor said that Government will earn revenue for the State as a major tourist attraction. Besides, four laning of NH66 from Karaswada to Bambolim at the cost of Rs.1672 crores has been completed, several other road projects have been completed, and the works of many water supply and sewerage projects are in brisk progress.
“The State Government has launched Swayampurna Goa in October 2020 with a vision to make Goa self-reliant. Under Swayampurna Goa 1.0, 1800 programmes have been organised, benefitting more than 40,000 Beneficiaries. Under this programme, all State Government and central government schemes have been taken to the doorstep of the common man,” he added.