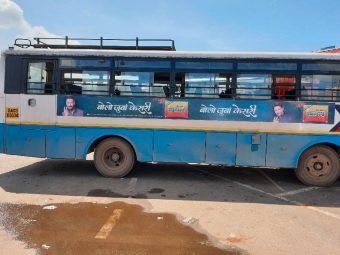 “I take this privilege to attract your kind attention towards the dubious means of surrogate advertising, and ostentatious proxy hoardings displayed by tobacco and cigarette products. companies across the state.The intent of this correspondence is to bring to your specific notice about the display of surrogate advertisements on Kadamba Bus Transport (KTC) buses plying across the state and other public places,” said NOTE President Dr Shekhar Salkar

He further said that Goa has been an ideal state in the fight against Cigarette and other tobacco products, the numerous efforts made by state health agencies and other NGO’s and support of subsequent governments and bureaucrats is the testimony for decreasing tobacco consumption trend.

“as per the latest Goa state survey done by GATS 2019 it is indicative that smokeless tobacco consumption has been increased especially in rural areas, such surrogate advertising has been largely attributed to this trend,” he added

CM should ensure supply of beef; should speak to Karnataka CM: Sardinha

Issue of formalin does not exist anymore: Vishwajit Rane

Goemkarponn desk PORVORIM: Minister Vishwajit Rane today informed that the issue of formalin does not exist anymore and that people should not fear. “The issue ... Read More

NEWER POSTCong wanted to form Govt in 2017 without Goa Forward: Saligao MLA Jayesh Salgaocar
OLDER POSTSudin was dropped from govt due to his selfishness: CM Sawant