This time in paddy fields at Barcem (Padi) area 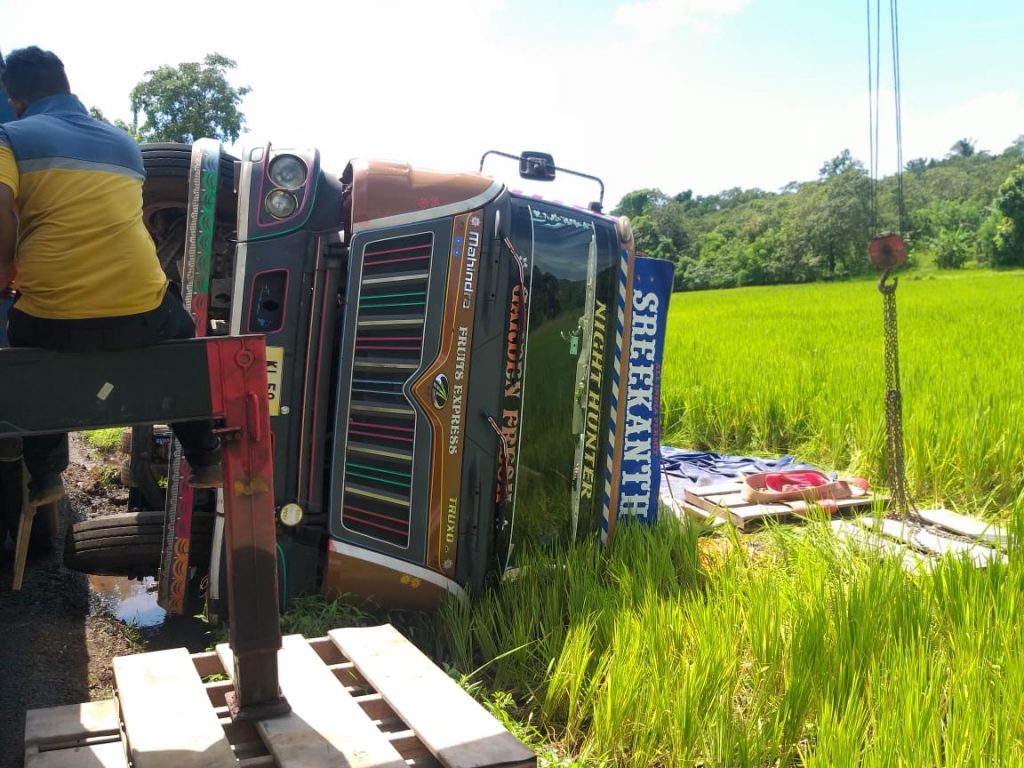 Goemkarponn desk
CANACONA – Yet another loaded Inter-State truck dived down the road destroying the cultivated paddy fields on the Narrow NH-66 road, this time at Barcem in the Padi area on Sunday.
According to sources, the tuck bearing registration no. KL 58 S 4488, loaded with fertilizer coming from Karnataka, was headed to Margao.
The Truck, however, fell off the narrow NH-66 road just after alighting the Karmalghat on Padi into the cultivated paddy fields. While the Truck fell on its side, partly destroying a large amount of flowered paddy crop, traces of burnt oil oozing out from the Truck were also seen entering the fields below and expected to destroy the crop.
Incidentally, while the saga of vehicles falling prey to the narrowness of NH-66 road right from Gulem to Balli continues, a media reporter of a local news channel was seen reporting the incident blinding himself with a black ribbon tied around his eyes.
Vishant Prabhugaongkar, a reporter with a local vernacular channel stating inspite of highlighting the bad engineering works as the prime reason for all the accidents and mishaps that rocked the National Highway-66 Road in the Gulem to Balli section, said the government as well as PWD not moving at all, forced him to report yet another news of Truck falling prey due to the same condition by closing his eyes.’

“I simply cannot see this type of condition continuing unhindered, and people/motorists are falling prey to accidents, that’s why as a mark of protest in my way, I shut my eyes with a black ribbon and reported the incident”, Prabhugaongkar stated when asked to clarify his stand and style of reportage.
The Truck was pulled and brought on the road with the help of a crane later in the day