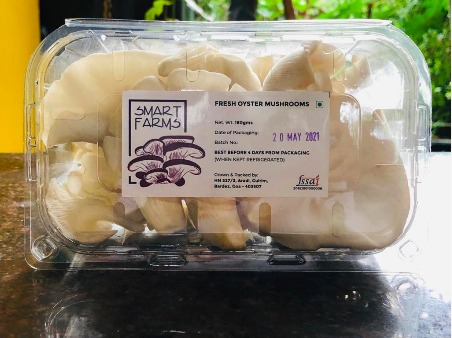 Panaji: While mushrooms have formed a part of our food for many years now, they are still underrated amongst the vast spectrum of ingredients available in the market. Generally, we see our local supermarkets selling packs of white button mushrooms, which is the type that one can find most commonly across the state. But these are just the tip of the iceberg amongst all the different variations of edible mushrooms that exist. 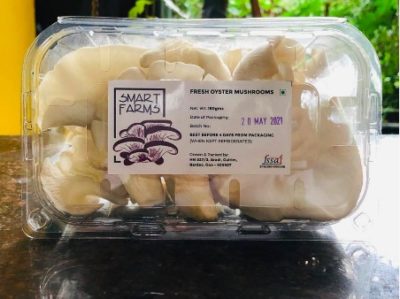 A variety of mushrooms that can form a considerable part of the human diet are Oyster Mushrooms. They are a source of protein, non-starchy carbohydrates, minerals, and many more nutrients. Because mushrooms also hold a meaty texture, these mushrooms serve as a decent alternative to animal meat for those taking on plant-based diets. With significant effort, oyster mushrooms can efficiently be grown by any individual. Fortunately, there are quite a few people who cultivate Oyster mushrooms across Goa. And amongst them, is Mr. Sruhid Vernekar, a man who believes that these mushrooms can be the “Food of the Future”.

Mr. Sruhid Vernekar and his wife, started an Oyster mushroom farm called “SmartFarms” in September 2020. They have always been fascinated with mushrooms, and to them, growing their own mushrooms meant building an understanding more than others. The mushrooms are grown using agro waste. This includes straw of paddy, wheat and ragi, stalk and leaves of maize, millets, sugarcane bagasse, and more. He further breaks down the cultivation process into five steps:
Preparation or procurement of Quality spawn 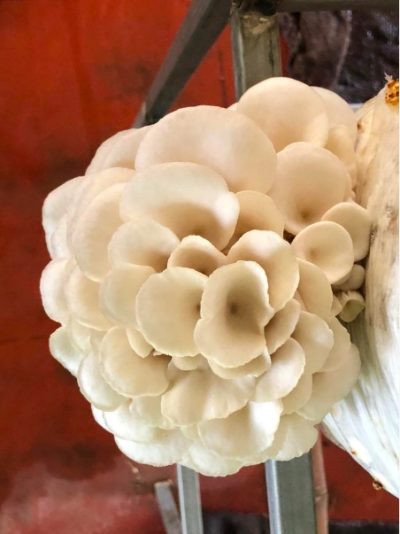 Preparation of Substrate as a growing medium for Fungus in favourable conditions
Spawning of prepared Substrate
Harvesting of Crop
Marketing & Selling of Crop
He says that with the right conditions, anyone can cultivate these mushrooms at home.

People often get sceptical about mushrooms with regards to safety, as some are known to be poisonous. “Oyster Mushrooms belong to the Family of Fungus with a Botanical name “Pleurotus ostreatus” and are classified as Vegetable in World food,” Mr. Sruhid says. He assures that these mushrooms are perfectly safe to eat.

While Goa might have a handful of people engaged in Oyster mushroom cultivation, there’s still a lack of much-needed awareness about them. Mr. Sruhid encourages more people to take up the practice only if they can dedicate themselves to it. “Only if you are serious and have a super positive attitude, you should venture into this stream as you will be faced with multiple challenges,” he says.
Oyster mushrooms can serve as a source of many essential nutrients that our body needs. It is also possible to grow them at home, making it a suitable option for those looking to grow their own food. Mr. Sruhid is also dedicated to making these available to everyone. So why not give Oyster mushrooms a try? With all the benefits that it holds, maybe it is the Goan food of the future.
[20:37, 6/23/2021] Suraj Nandrekar: BJP MLA files聽鈧5 crore defamation suit against singer in Goa
Clafacio Dias first filed a police complaint accusing the singer of hurting religious sentiments and forced Gomes to apply for anticipatory bail. Alison Gomes was granted bail before the lawmaker filed the civil defamation suit
Ruling Bharatiya Janata Party (BJP) lawmaker Clafacio Dias has filed a聽鈧5 crore defamation suit against singer Alison Gomes, saying the lyrics of a song by the latter deeply demean his reputation.
The song titled “dongui (hypocrite) MLA” does not name Dias but alleges illegalities including illegal land development and amassing of wealth. The song was uploaded on YouTube and quickly became popular. It got over 120,000 views within a few days.
Dias first filed a police complaint accusing the singer of hurting religious sentiments and forced Gomes to apply for anticipatory bail. Gomes was granted bail before the lawmaker filed the civil defamation suit.
Dias said he was forced to file the suit as Gomes accused him of destroying shrines–particularly crosses, prominent symbols of Catholicism in the state– and then rebuilding them to show himself as the community’s saviour.
“I do not mind singers, or theatre actors accusing me of corruption, or of amassing wealth or of indulging in illegalities. Such accusations are common against politicians… But he has said I break the shrines, so I have an excuse to repair them the following morning,” Dias said.
Gomes said he has the freedom of speech and accused Dias of targeting him because “his misdeeds were being exposed”.
“He did not want his misdeeds to be exposed. In the song, I said the dongui (hypocrite) MLA of Curtorim. I did not take anyone’s name. This is an attempt to stifle one’s freedom of speech. After making the complaint, he sent the police to my home to search my house,” said Gomes. “He said I was hurting religious sentiments. I have sung about only what has been reported in the media. I have all the proof. He can go ahead with whatever case he has.”
Elvis Gomes, a former convener of the Aam Aadmi Party in Goa, said the lawmaker should understand that criticism from the stage is nothing new in the state. “It has been going on for years and it is considered as one of the powerful ways to give vent to the voice of the people. If a tiatrist (Goan theatre personality) or a singer from a stage says something, he can always counter it with his viewpoint either through the same medium or a press conference.”
Elvis Gomes said the important question is whether police should be used against artists or anybody for that matter. “The MLA needs to understand that criticism from the public is the hallmark of democracy. I think they have become too sensitive because of the mistakes they are committing.”