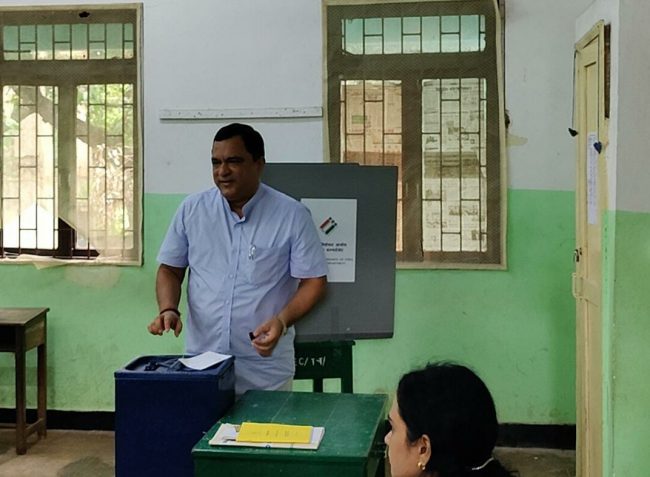 Goemakrponn desk
Political opponents Captain Viriato Fernandes and Panchayat minister Mauvin Godinho cast their votes for their candidates at the Regina Mundi polling stations on Wednesday.
While both the political opponents cast their votes for their candidates, the focus continues to remain on Shital Pereira, the wife of outgoing Chicalim Sarpanch Seby Pereira, the former strong man of Mauvin Godinho. Shital Pereira is presently contesting the elections against the candidate placed by Mauvin Godinho.
Speaking to the media, Capt Viriato Fernandes said that elections are a democratic process and government machinery must not be used to influence the elections.
“We have seen how the police are being used to threaten the candidates and their supporters. The police are being used to intimidate people, and the entire government machinery is being misused. This is an insult to the democratic process, and I urge the people to come out fearlessly to cast their votes in large numbers so that a good person can be elected for the betterment of the village,” said Fernandes.
Panchayats Minister Mauvin Godinho, who had arrived with his son at the Regina Mundi polling station, said that he had been voting for the panchayat elections for the first time. 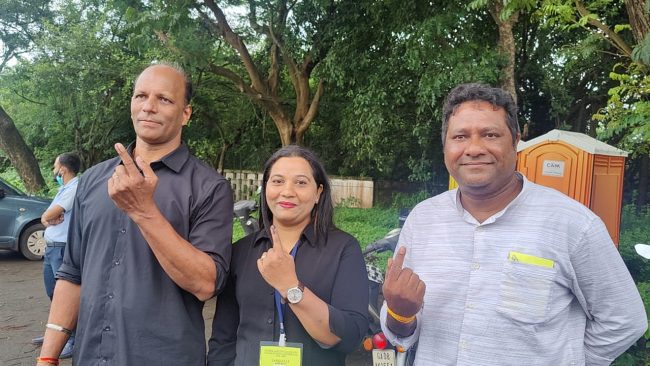 “I was based in Mangor hill and have for the first time cast my vote for panchayat elections. The elections are an opportunity to ensure that people get capable people elected. We have seen how people who get elected gravitate to the ruling party for getting the work done because the ruling Government of the day has proved with several development works that have benefited the people. We have seen how funds have been increased for panchayats and how we have systematically taken up the issue of garbage disposal through scientific methods. We are also planning to take up liquid waste management, and the people must ensure that they elect a panch who can get such Development works in their wards,” said Godinho
Meanwhile, Outgoing Sarpanch Seby Pereira said that it was the people who had insisted that he place his wife as a candidate for the elections from the Chicalim panchayat
“My ward was reserved for OBC, and the other adjoining wards were reserved for women, and I had decided to stay away from elections. However, the people of the area insisted that I get my wife to contest elections, and the people will finally decide her fate. The people have forced her and will hopefully get her elected as well,” said Pereira
Meanwhile, residents of the ward have said that people capable of taking up development works need to be elected.