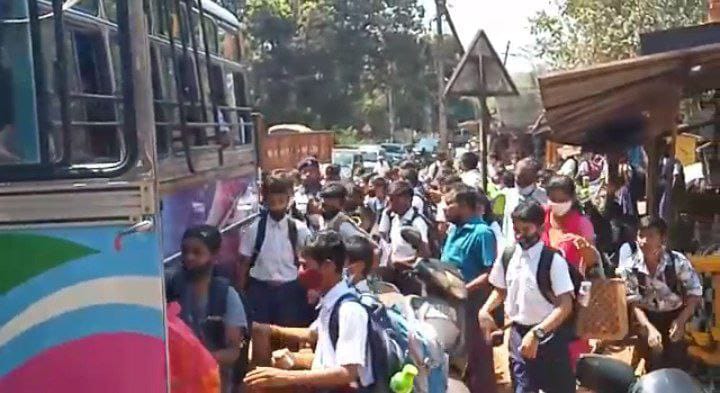 PONDA: Acting upon a complaint filed by locals, Ponda BDO has directed Curti Khandepar Panchayat to take action against illegal encroachment at OPA Khandepar Junction so that a bus shed could be constructed at accident-prone OPA Junction.
According to locals, the students are risking life by standing on the road while waiting for the bus, which poses a risk to lives.
In this connection, BDO has directed V. P. Secretary V. P. Curti Khandepar to go through the contents of the complaint, verify the facts & initiate necessary action as per the Goa Panchayat Raj Act 1994.
According to a complaint filed with BDO, one local had obtained Provisional NOC from the Panchayat to operate a business at a Public place (Opa Road Junction) on (30/11/2012) without providing any land ownership documents.
Further, without complying with the condition of provisional NOC, Panchayat issued him a trade license in 2019-20 after 8 years which is unlawful as per Panchayat Raj Act 1994. Provisional NOC can only be renewed by complying with the conditions applied.
Further, the said shop owner has violated all the terms & conditions mentioned in the Trade license.
He occupied a public place which was kept for students’ children for their safety. He should have produced a legal document of the shop. Thus students are facing the hardship of standing on the road for the bus, thus risking their lives.