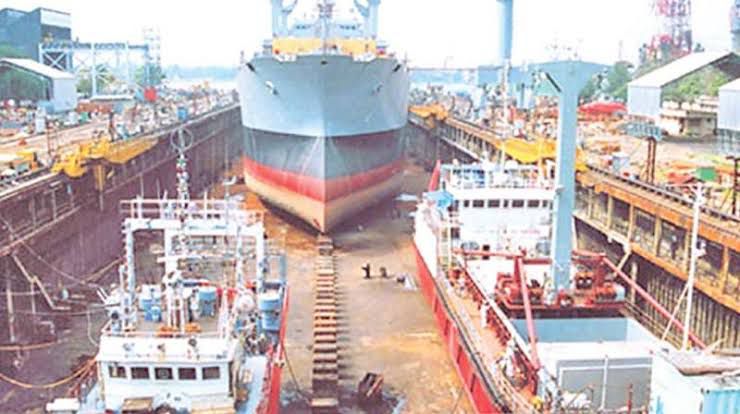 Goemkarponn desk
PANAJI: Even though Goa and its surrounding areas are one of the most active and energetic maritime clusters in India, the Covid pandemic-induced national and international lockdown brought in a massive lull in the ship-building sector in the coastal state, that businesses have not yet been able to recoup and recover from, claims the Centre for Promoting Indian Economy or CPIE India in its special report on the shipbuilding sector in Goa.
The CPIE India has released several reports, studies and White Papers on various segments of the Goan economy, researched, compiled and authored by experts in the field, including topics such as environment and fishing segments.
The shipbuilding industry in Goa, which has been existed for centuries ever since the Portuguese set foot on the land, or even before, experienced one of its worst periods in 2020 and to some extent in mid-2021 as companies did not place orders or put on hold existing projects, causing a 90 per cent drop in business and resulting job losses, during April 2020 to March 2021, the CPIE India paper stated.
While Goa has been building sailing ships since pre-Portuguese times, the last century has seen a quantum jump in organised shipbuilding activity.
According to reports, most of the inland and coastal vessels or near shore vessels operating along the Indian coastline on the western sector from Gujarat to Karnataka have all been built in Goa.
Not just that, Goan shipyards have been exporting fully built hulls and even certified ships, tankers and barges to countries like the UAE, Europe and other Asia-Pacific countries.
In the last 30 years, the shipbuilding industry in Goa was a natural progression from mining activities and inland water transport of cargo and food items, with ships and barges playing a major role during the mining boom years about a decade earlier.
Right from passenger steamers which plied between Mumbai (then Bombay) to Goa in the 1950s and 60s to more advanced barges for the transportation of iron ore, the Goan shipbuilding industry has managed to fight off competition from shipyards in Mumbai, Cochin and Visakhapatnam, explains Bernard Sequeira of Maritime Research Network and a domain expert with the CPIE.
According to Ramesh Phadte, a maritime consultant for the CPIE, Goan shipyards and shipbuilders have the knowledge base, expertise and trained workforce to build steel, aluminium and fibre hulls for vessels of different sizes and for various types of sea conditions, which speak volumes about the high quality of technical expertise and experience and locally available engineering skills.
Due to its strategic geographical location and connectivity, Goa has the biggest maritime cluster on the western coast of India.
Looking towards the future, good connectivity to rail, road and international air transport is almost in place. The existing Dabolim airport and soon-to-be-launched MOPA airport will open many more avenues giving a huge fillip to the shipbuilding sector in Goa, opines Phadte.
Two of the major waterways with ready basic infrastructure on rivers are already in place in the coastal state. One prominent natural port and one minor port form the Goan shipbuilding sector infra network.
The state’s geographical location and proximity to other growing and emerging economies like the UAE, Asia-Pacific, Africa and countries like Maldives, which heavily depend on marine transportation to move their goods, makes it an ideal choice for shipping firms placing orders for ships of different sizes and needs.
The shipbuilding industry in Goa is poised for tremendous growth and an excellent opportunity for expansion with initiatives by the Central and State governments like Sagarmala, National Logistics Policy and Atmanirbhar Bharat – Swayampurna Goa giving the sector an incentive to improvise and grow at an astounding pace.
Opportunities for innovation and growth are in store for local Goan shipbuilders, both small and big, predicts the CPIE India paper. The goal of the National Logistics Policy is to lower the cost of logistics from its current 14 per cent of GDP to less than 10 per cent and the Goan shipbuilding industry must rise to the occasion and take full advantage of these opportunities, CPIE said.