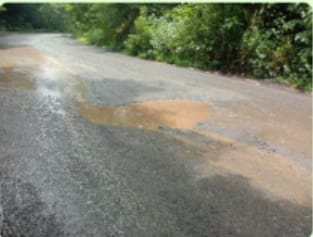 Goemkapronn desk
PONDA: It’s almost six days now that the alert citizens have brought to the notice of the PWD Executive Engineer and Assistant Engineer about the huge pothole on Bethora – Borim Highway, but no measures have been taken by the department.
The locals say the PWD failed to repair the huge pothole in the middle of the road on the Bethora-Borim Highway, which is used by commuters travelling on the Margao-Belgaum Highway.
Viraj Sapre, who was the first to create awareness of the huge crater, said now almost four to five days had passed.
“The officials say they will repair and fill up the pothole using a jet patcher machine in two days. However, now six days had passed,” Sapre said.
He questioned whether the officials were waiting for disaster?
Considering the grave threat to lives, the officials should not wait for disaster but repair the crater using traditional methods.
Viraj said there are 100 per cent chances of fatal accidents, and some motorists are already injured after falling in pothole.
“In case of rain, the crater is invisible as it fills with water. The vehicles are proceeding from the wrong side to evade the crater,” he said.
Sandeep Parkar, too, said he also complained to officials through social media and said their urgent action into the matter.
Meanwhile, when contacted, AE of the PWD Divison 18 sub-division 1 said the pothole would be repaired by today night using Jetpatcher Machine.
The senior officials said the machines were busy elsewhere and will reach today at the spot.