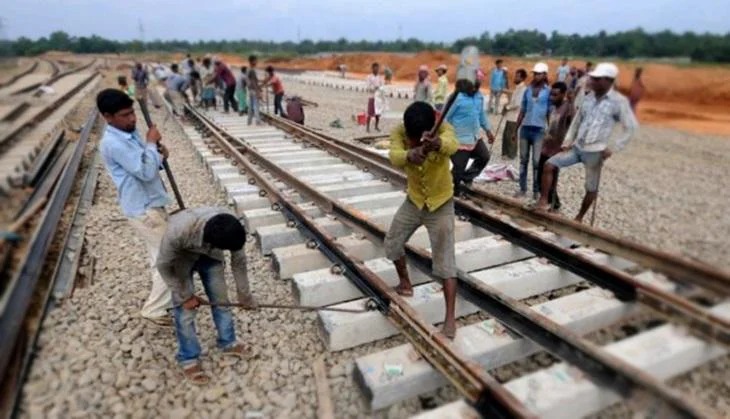 Goemkarponn desk
VASCO: Mormugao Dy Collector Ravishekar Nippanikar has given a clean chit to the Railway Vikas Nigam Limited over the fresh controversy in the double tracking issue saying the Railways were working well within their land.
The Dy Collector asked the villagers protesting to prove teh ownership of land if they had any dispute.
Speaking to reporters, Nippanikar said that Railway authorities were working well within their own land at Velsao and that any villagers opposing the project must produce their land documents to prove their claim on railway land
“It was given to understand from the Railway authorities that some of the villagers are agitating against the railway works which are being carried out in their own land, and I went to the site and met former panch Ashok Souza, Velsao Sarpanch Maria Gouveia and a local resident Orville Dourado,” he said.
He said that he has told them that the Railways are carrying out the works on the property belonging to the railways as per the survey plans and if any of them have a claim on the Railway property, they must produce the survey plan or land records of their claim on the railway land.
“None of them appeared before me with their document pertaining to their claim on Railway property,” said Nippanikar.
“I have also told them, and the Railway authorities have also conveyed that any of their traditional existing access will be maintained by the Railways. I had also told them that if they found their land records, they could come to my office or the railway office and produce the document before the authorities for their claim on the railway land, and none of them turned out to claim their rights on Railway land. I then instructed the Railways to continue their works,” said Nippanikar.
Further, he said, this is done as per procedure, and this land existed before the survey records conducted in the land revenue code 1968, and nobody has filed an objection on this land to date on the Railway property or the existing tracks.
“We don’t have any such case where anyone has produced relevant documents like Form 1 and 14 or survey records or ownership document on the railway track for several years, and there is no question or scope of anyone claiming right on the railway land,” he said. Nippanikar says people claiming that Railways is working on private properties must appear with relevant documents before him or Railway authorities.
“We can stop that work and enquire into it, but no such case has been found,” said Nippanikar.