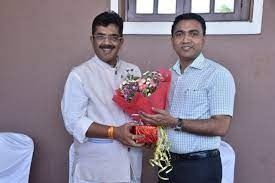 Goemkarponn desk
PERNEM: BJP State President Sadanand Tanavade has refuted rumours and informed that Pramod Sawant will complete the entire term and that there will be no change in Chief Minister.
“There are rumours going on the cross the state on Goa Chief Minister change, but the question does not arise. CM Pramod Sawant will complete the 5-year tenure. There will be no change in Chief Minister,” said Tanavade.
On cabinet allocation to Digambar Kamat and Micheal Lobo, Tanavade said that the central leadership had just told the state BJP to take them into BJP, and no such proposal of granting cabinet portfolio has been taken.
“At the moment, all such news is rumours. There is no such proposal,” he added.
The eight Congress MLAs – Kamat, Michael Lobo, Delilah Lobo, Rajesh Phaldesai, Kedar Naik, Sankalp Amonkar, Aleixo Sequeira and Rudolf Fernandes – were seen interacting with Sawant in a viral photo an hour ahead of formally joining the BJP.
The current cabinet has eleven ministers from the BJP besides Sudin Dhavalikar of the ally MGP. The state can have a maximum of 12 ministers.