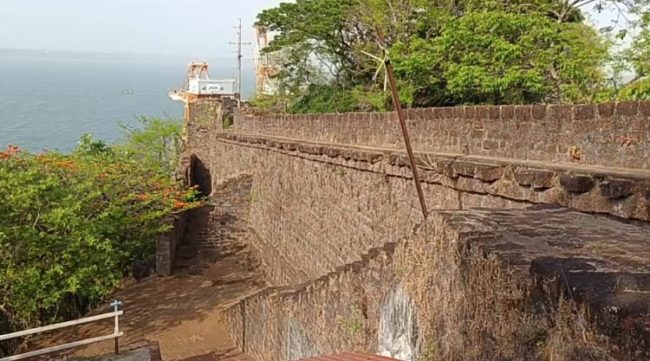 Goemkarponn desk
VASCO: Activists and people feel that police patrolling needs to intensify in the Sada, Vasco area as antisocial activities are taking place in secluded places.
Vasco and Sada area has been in the news most of the time for wrong things, be it scandals, fights, rapes, Law and Order situations and whatnot. The main reason behind such incidences happening rapidly is the unsettling, undisciplined surroundings, which boosts such antisocial elements and activities.
It is being found that a few months ago, youths from Sada, Vasco and other parts of Mormugao taluka were coming to the Mormugao Fort and were indulged in illicit behaviour such as alcoholism, consumption of Narcotic substances, gambling and so on. But fortunately, after these issues were highlighted in mainstream media, there are now two guards at the entry point of this fort. They ask for your Identity Card and note down your name and other details in their register book. This move by the government has deterred many miscreants from indulging in objectionable things at this heritage site.
But the same is not happening everywhere else. There are still some secluded locations in the Vasco and Sada area where the minor couples spend quality time. Some youths get involved in drinking, smoking and narcotics. This needs to be stopped. I urge Mormugao police to immediately take cognisance of this issue, said Seema Behera, a Human Rights Activist based in Sada.
Xencor Polgi, an anti-coal activist, is also vocal about this issue and he feels that the heritage sites need to be protected and promoted. But sadly, some antisocial elements tend to misuse some places for doing unacceptable things which are not right.
He further said that local police should conduct a strict vigil in the Sada area and should take strict action against miscreants.