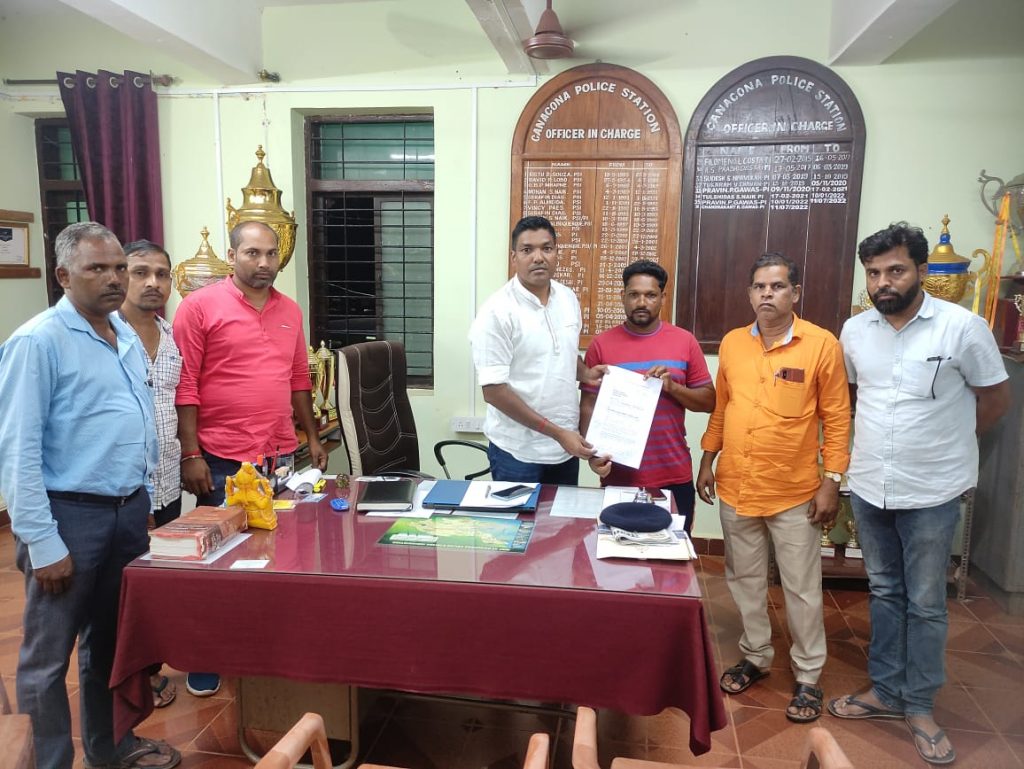 CANACONA- Alleging Murder, the family of the deceased Chandrashekhar alias Shekhar Velip (whose dead body was found in Talpona river at Bhatpal last Tuesday) called on the police to investigate the death as Murder.
It may be recalled that the body of 27-year-old Shekhar Velip, a youth from Nuvem-Sristhal, was found floating in the river at Bhatpal after he reportedly went missing on Sunday evening. Police said the death was by drowning, as revealed after the conduct of postmortem, but viscera is preserved and sent for further analysis even though the family suspected Murder.
According to residents, the body of the deceased had no clothes on his body, and further alleged his face was disfigured by acid, besides
stating neither the family nor the residents believes in the police theory of Suicide and has submitted a memorandum to Canacona police to register the death of Shekhar Velip as Murder and carry out a proper and thorough investigation.
The memorandum submitted by the maternal uncle of Velip, Ashok Kusta Velip handed over to Canacona PI Chandrakant Gawas in the presence of Shrishthal panch members Rajesh Kuiro Velip, Ganesh Gaonkar(also Ex-sarpanch), Darshrath Velip, Khotigao panch Prashant Velip and others on Tuesday, states on looking at the body itself, it created doubts and suspicion that the victim is killed/murdered, as they feel the deceased is beaten-up with some weapons, face burnt by some substance, the body was without a shirt, and there were fracture injuries on the left hand. The family also alleged lucanae in the police investigation to draw a conclusion of Suicide.
Demanding registration of the case as Murder and beginning the investigation earnestly as any delay in the proper investigation could provide an opportunity for the culprits to tamper with the evidence. The family also raised suspicion about the placement of his articles (mobile, Motorcycle, etc.), which they claim is not per his lifestyle.
Accepting the memorandum, Canacona PI informed that the circumstantial evidence points to Suicide, even as the Postmortem report came as death due to Drowning, and further action will be initiated only on receipt of chemical analysis of the viscera of the deceased.
According to police sources, the victim was working as a delivery boy with an Online shopping app, and his last calls traced from his mobile were somewhere during the afternoon time of Sunday which, two days before his body was found floating in a river on Tuesday.
Local sources, however, informed the deceased had two sim cards and police have not yet verified or checked both mobiles of the deceased, especially WhatsApp chats
It is learnt that the deceased has lost some lakhs of rupees to some online fraud sites/apps and allegedly borrowed money from some people.
Some of the residents who demanded justice for the deceased and his family and sought registration of murder charges in the death of Shekhar Velip and investigated accordingly are Sagar Velip, Ashok Velip, Dinesh Bhagat, Krishna Velip, Jess Fernandes and
Pradeep Velip, amongst others.