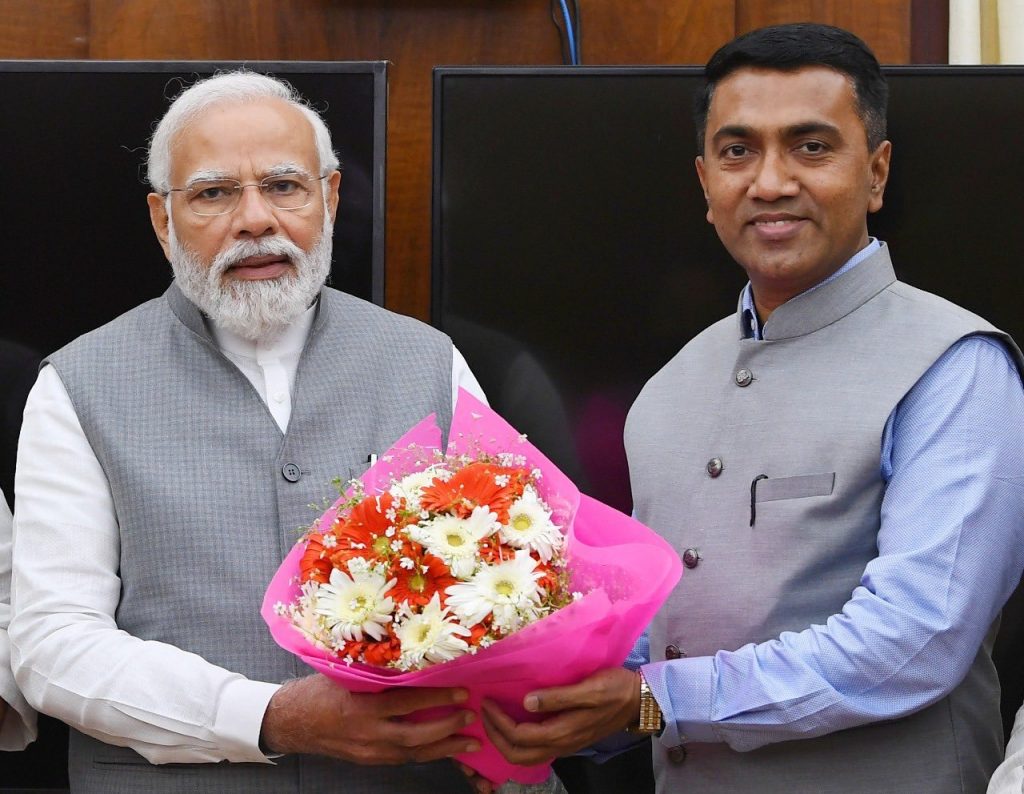 Goemkarponn desk
PANAJI: Chief Minister Dr Pramod Sawant said that any development in the State is possible when people’s participation is involved.
He urged the people to participate in every mission of the Government for the Development of the State.
CM was speaking after Prime Minister of India, Narendra Modi has virtually addressed the ‘Har Ghar Jal Utsav under Jal Jeevan Mission and launched QR code services for water bill payment event organized at Institute Menezes Braganza, Panaji.
During his virtual address, the Prime Minister congratulated Chief Minister Dr Pramod Sawant, his Cabinet Minister and the people of Goa for achieving success in becoming the 1st State to achieve a 100 per cent piped water supply system for every household, expressed his happiness toward another milestone achieved under the mission Har Ghar Jal, i.e. 10 crore rural households of the country have been connected to piped clean water facility including Dadra Nagar Haveli and Daman and Diu as first Union territories, and more than one lakh villages in different states of the country have turned ODF plus. Apart from this, India has also significantly increased the number of wetlands.
“Today its number has also increased to 75. Of these, 50 sites have been developed in the last 8 years only,” he added.
The Chief Minister speaking on occasion, congratulated the entire team of PWD, WRD, Directorate of Panchayat etc, who were felicitated on occasion at the hands of the Union Minister for Jal Shakti Gajendra Singh Shekhawat for their immense contribution to achieving the great success of certifying Goa as 1st State to achieve 100 per cent piped water supply system for every household under Har Ghar Jal under Jal Jeevan Mission mission. He also appreciated the self-initiative taken by Alen Lobo to prepare QR coding of all water bodies in the State by spending his own money.
Speaking on QR Coding, he said Goa is the first State to provide QR coding facilities for billing. He thanked TGSB bank for supporting this system. Through this system, the billing and collection system will be improved, he added.
He said Jal Jeevan Mission is a flagship programme of the Government of India that was announced on August 15, 2019, from the ramparts of Red Fort by a visionary Prime Minister. The mission aims to make provision potable tap water supply in adequate quantity, of prescribed quality and on a regular & long-term basis to every rural household in the country by 2024.
He expressed his happiness towards Goa becoming the first State to achieve this mission despite many difficulties and the Covid-19 pandemic. He added that 14 national accreditation labs have been established in the State to provide purified water to every household.
“By making maximum use of different technologies, we are going forward and achieving ODF, Har Ghar Jal, 100% electrification etc., with the support of all cabinet ministers, MLA, bureaucrats, officers and every staff of the department,” he said.
He also recalled the Atmanirbhar Bharat mission started by the Prime Minister of India; the Government has started the Swaympurna Goa mission and set the target for sustainable development goal to support the Atmanirbhar Mission.
“Goa is the number one State to provide one of the best solid waste management facilities, including to treat bio-medical waste. Even to treat e-waste management facility, Goa will be the first State to treat construction waste material, CM said.