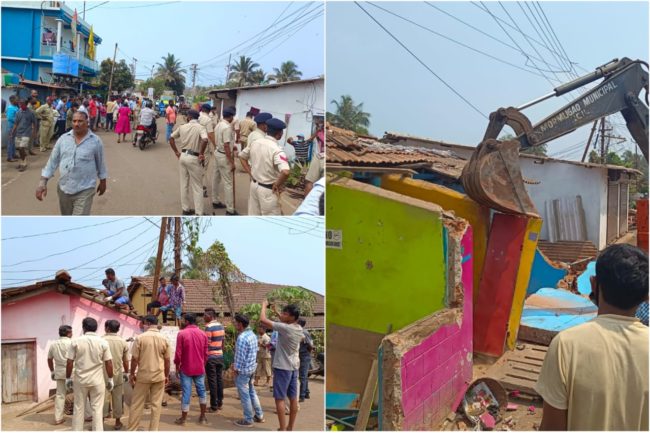 VASCO: Mormugao municipality cracked a whip on the illegal encroachments of 18 houses from the Khariwado-Vasco area. The encroachments were raised with the help of the demolition squad municipality workers in the presence of the police force.

On Wednesday morning Mormugao Municipality as per the court order undertook the drive to clear the encroachments of around 18 houses from the Khariwado-Vasco area. Demolition squad, municipal workers with the help of mechanical earth mover the encroached laterite structure was demolished.

The residents and their family members were annoyed and tried to stop the demolition work. Still, with the intervention of the local police, the situation was brought under control before it could go out of hand.
The municipal engineer municipal inspectors, and the team of workers, were busy in this encroachment clearing drive.

The residents told the media that for around 20 years, they have been fighting a case in court for the regularisation of the houses. One of the residents said they were about to clear the other encroachments by themselves. Still, on Wednesday, the municipality has came and demolished the structure, and it is now where our children and women should go.

Later, when contacted, Jayant Tari, Chief Officer of MMC, informed that this encroachment clearing drive was conducted as per the court orders. This drive will continue for two days that is on Wednesday and on Thursday. Total 18 encroached structures will be cleared with the help of demolition squad in the presence of police force,” he added.

Russian National arrested for possession of drugs at Pernem

Pernem Police have arrested one Russian National for illegal possession of drugs at Mandrem.   As per PI Jivba Dalvi information was received regarding a ... Read More

Goemkarponn desk VASCO: Heavy traffic movement from the Varunapuri flyover will start within one or two months before Monsoon. Demarcation for installation of signals has ... Read More