This is how the Heritage zone was DESTROYED… 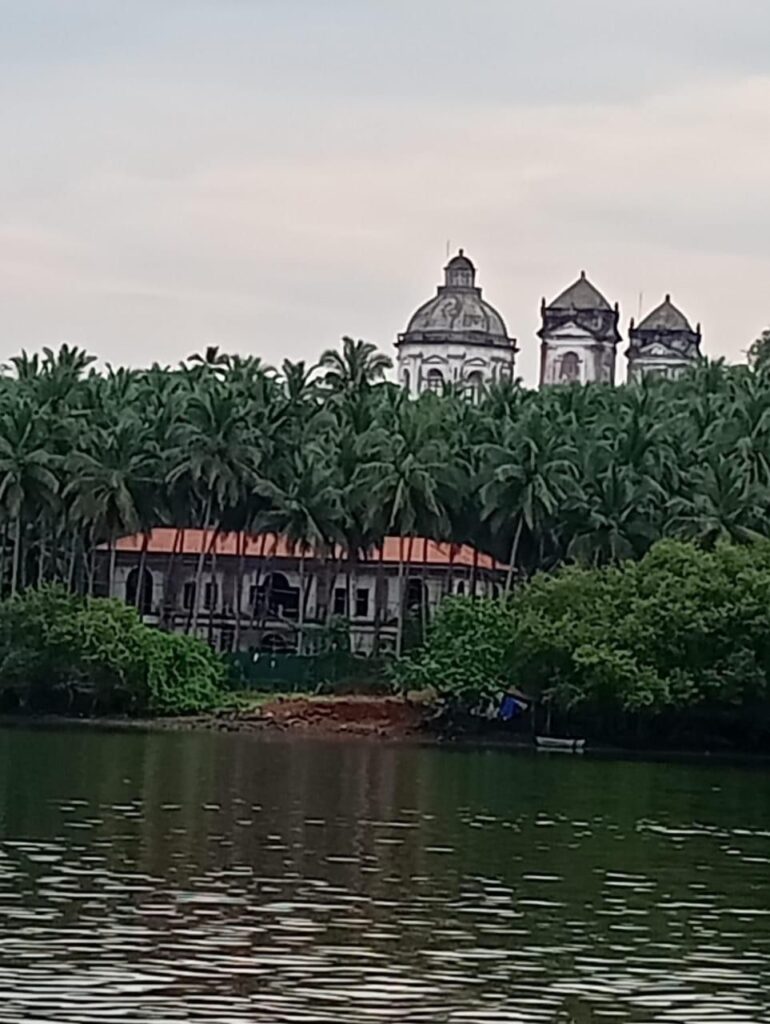 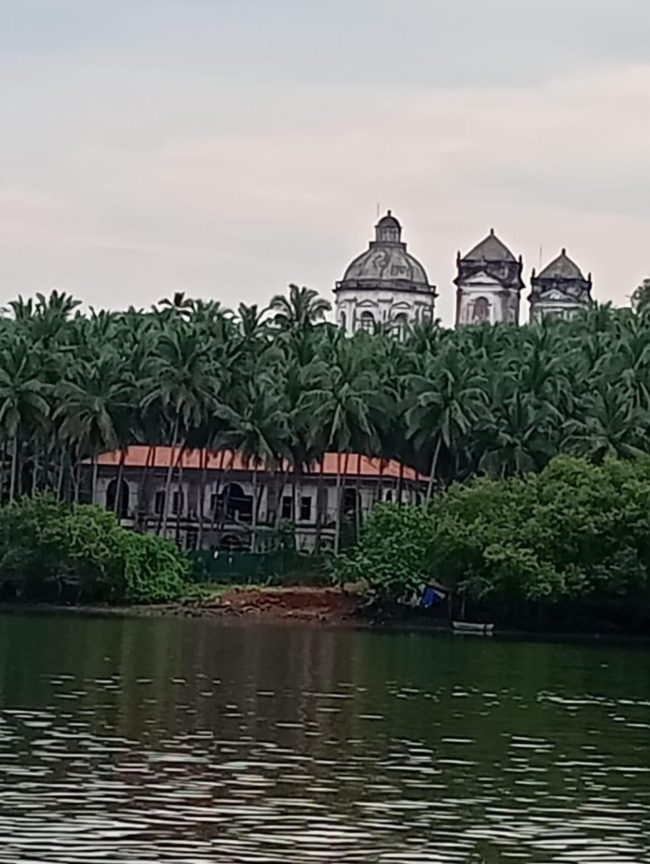 Goemkarponn investigations reveal how the people close to CORRIDORS OF POWER connived with politicians and authorities to get reconstruction permissions of a house that never existed.

The most burning issue in Goa today is the “illegal” house in the heritage zone next to St Cajetan Church in Old Goa.
While the people under the banner of Save Old Goa are fighting and a massive crowd gathered to oppose the construction, the Government still seems to be unmoved; the reason is that the culprits are close to the CORRIDORS of POWER.
While it is no secret that the two persons involved in the construction are politicians themselves – Manish Munnot is the husband of BJP top leader Shaina NC and second is Suvarna Suraj Lotlikar, the wife of former Goa Forward treasurer Suraj Lotlkar.

The illegal construction….
The illegal construction comes in the precincts of St. Cajetan Church, a Protected Monument area as per the AMASR Act.
Incidentally this is one of the 7 Protected monuments recognised by UNESCO as World Heritage Monuments in 1986.
As per the records available, two individuals named Manish Munot and Suvarna Suraj Lotlikar purchased this said property under two separate sale deeds on 8th May 2015.
Although the two sale deeds were executed, these two individuals refused to reveal their identity for fear of backlash and continued to fraudulently obtain all the statutory permissions in the name of the original owners. It appears that this fraud is not only limited to a portion of the plot purchased by Manish Munot but another structure will be constructed in the portion purchased by Suvarna Suraj Lotlikar, which is clear from the plan attached to the sale deed.
The plot in question bearing survey no. 4/1 and old cadastral survey no. 35 of Ella Village is a part of a Largo of St. Cajetan were other important monuments like the Viceroys Arch Ruins and Viceroys Palace, Customs House and an old public open space of the docks of the Old City.
As per the law in force, the ASI does not permit any reconstruction of new construction in the protected area. At the most, a repair of the existing structure is allowed as per the ASI letter dated 03/02/2020.
The plot in question also falls within 100 mts of the river Mandovi, an NDZ, and the same criteria of only repairs are allowed. Here also the CZMA has illegally permitted a new construction Licence letter dated 28/02/2015

The illegalities….
The Conservation Committee issued permission to reconstruct a new building in total violation of the existing laws.
If one looks at the cadastral survey plan, one small structure that appears to be a hut to store coconuts existed.
A survey conducted by the ASI in February 2018 also clearly shows a small structure.
The dilapidated hut in traditional material of mud and tiled was not even reflected in the survey plan till 2015; however, all of a sudden, the Deputy Collector, through an Order, ordered a structure admeasuring 397 sq mt to be marked on the survey plan.
The fraudulent act with the connivance of the Authorities was done with the ulterior motive of building a new structure at this protected site by those who purchased the plot.
In fact, this fraud is clear from the narration of the ASI report dated 28/10/2015 and 18/03/2020.
It is shocking that the applicant fraudulently misrepresented the existing structures by attaching a photograph of one of the existing house/ structure situated at Parcel in Pernem as per Google Co-ordinates and clearly, this fact is mentioned in the ASI letter dated 18/3/2020
Its seen that this area being a Protected area as notified in 1968 does not come under the preview of the N.M.A and its terms of reference.
Permission for repairs only of the existing structure was granted by ASI Delhi, without any changes to the facade or additions.

Permission for repairs to an existing residential house in Survey No. 4/1 of Village Flin (Old Goa),
With refèrence to your letter dated nil on the subject cited above. I am to communicäte the approval of the Competent Authority for taking up repairs of a house located in the protected area of two centrally protected monuments i.e Church of St. Cajutan and Viceroy’s Arch, Old Goa,
The permission is further subject to the following conditions:
1. The repair work should be taken up in consultation with the Superintending Archaeologist (I/C),
ASI. Goa Circle.
2. The exterior colour should match with the monument.
3. There shall be no change in the façade design.
4. There shall be no building material staked on the roadside or near the monument
5. There shall be no inconvenience to visitors.
6. It should be ensured that no damage is caused to ancient/archaeological structures within the
monument area.
7. The Provisions of AMASR Act. 1958 and Rules, 1959 made thereunder shall be observed.
8. If any object of antique nature is found during the course of work, it has to be submitted to SA
(V/e) immediately.
9. There Should not be any variation in length, breadth and height of the structure to alter repairs in comparison to the existing dimensions.
10. SA ((I/c) Goa Circle would keep a strong watch on the repair work, document it periodically, and submit a fortnightly report to this office.
11. The permission does not cover reconstruction.

ASI Inspection report…
Application for residential house construction falls in the Protected area of the Centrally Protected Monuments (Copy of the Gazette Notification is attached) of Arch of Viceroy and the world heritage site Church of St. Cajetan, Old Goa.
Since the proposed construction is entirely NEW PERMISSION CANNOT BE GRANTED as it falls in the Protected area, only repairs to the existing structure as
it is, maybe, granted without any addition to the structure. (photos enclosed of the present structure)
Technically, permission in the protected area is beyond
the term of reference of Competent Authority, National
Monuments Authority.

With respect to the above-cited subject, it is brought to your attention that this office received a copy of the documents from Suvarna S Lotlekar.
She claimed that the same documents were already submitted to the D.G., A.S.I. by her.
In that document, there is a photograph of a house (copy
enclosed). The applicant claims that the house in the photograph existed in survey number-4/1, village Ella, before it was destroyed by a storm in 1992.
However, this office received information that the house in the photograph exists in village Pernem, District North Goa.
To find out the fact of the matter on March 11, 2020, the team headed by K Amarnath Ramakrishna, SA, Goa Circle ASI, along with Dr. Izhar Alam Hashmi, DySA and Tarang Mahesh Gharpure, AA with witnesses (1) Chandrashekhar Yalwar, (2) Madhusudhan Reddy M. Patil; visited Parcem village in Pernem Taluk of North Goa District and inspected the house.
During the inspection, it was found that the photograph submitted by the applicant is false, and the claim of the existence of the house in survey no. 4/1 of village Ella, before the year 1992 is fake.
The detailed site inspection report is enclosed herewith for your kind information and further necessary action. 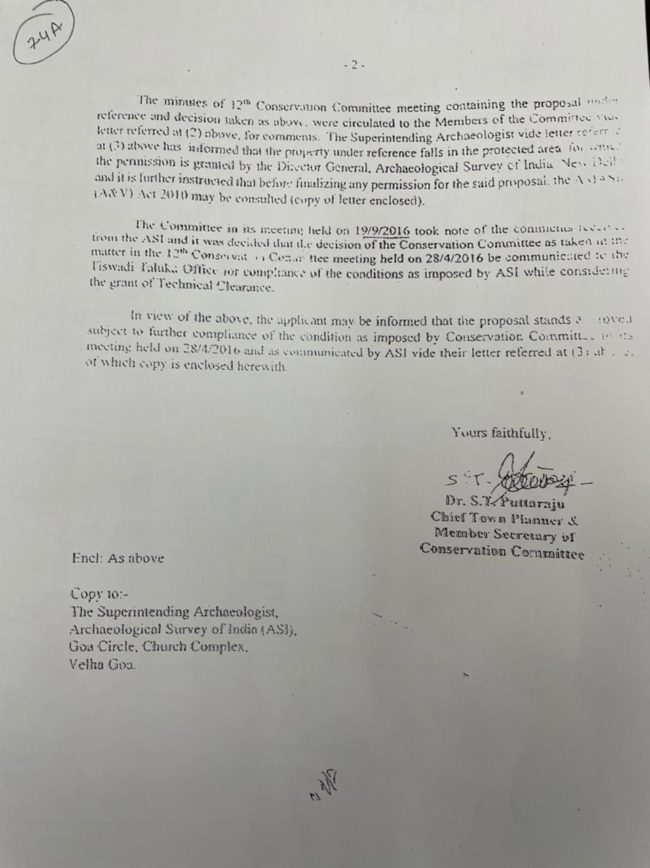 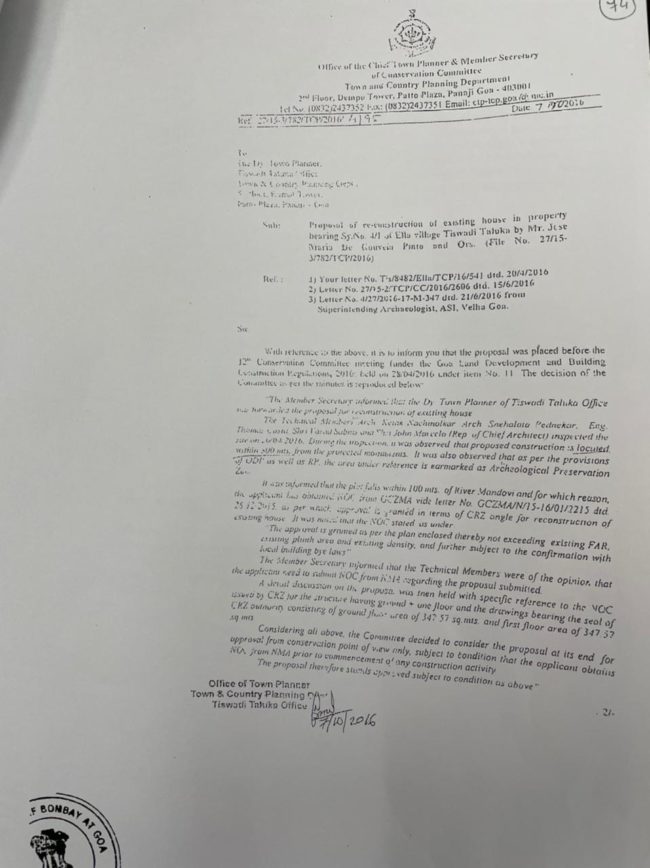 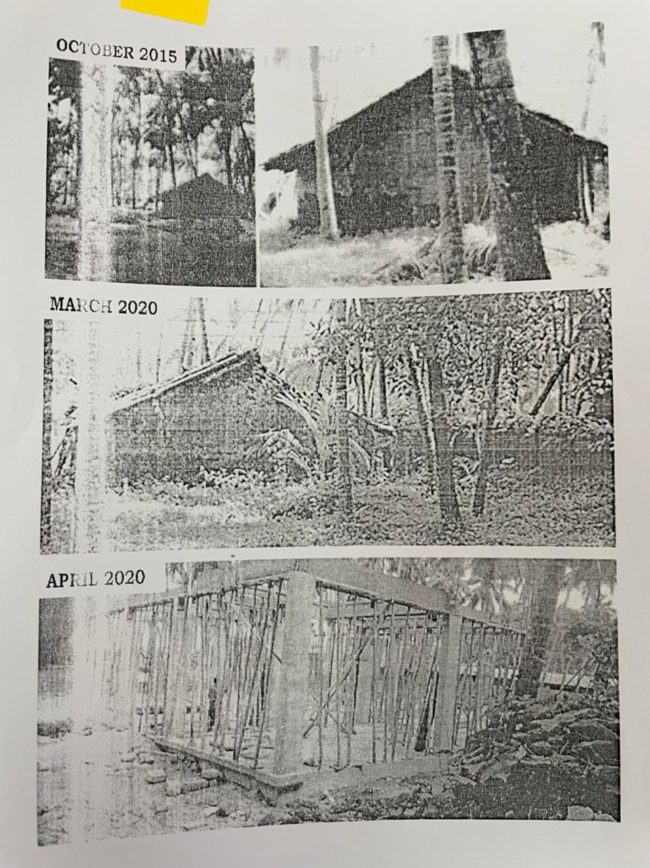 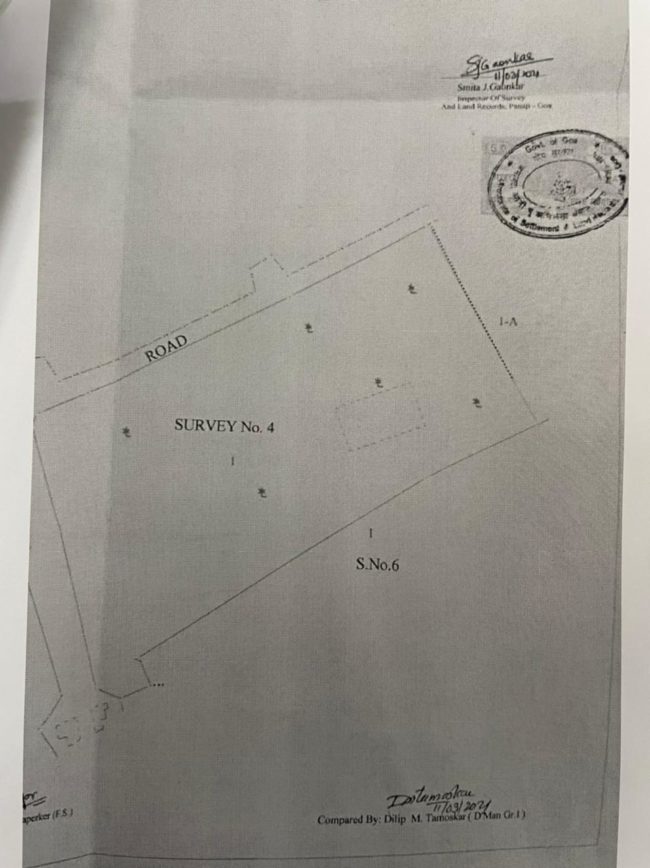 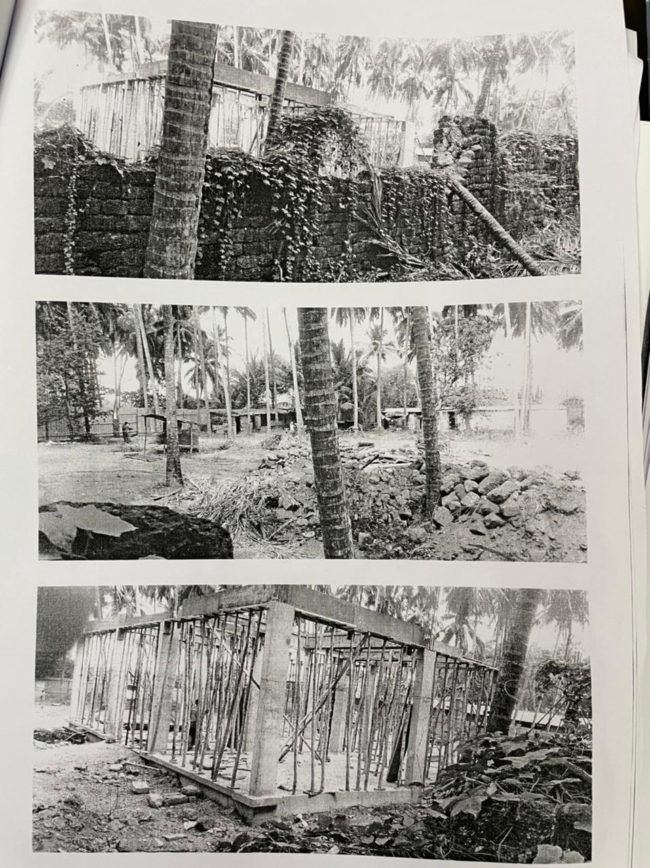 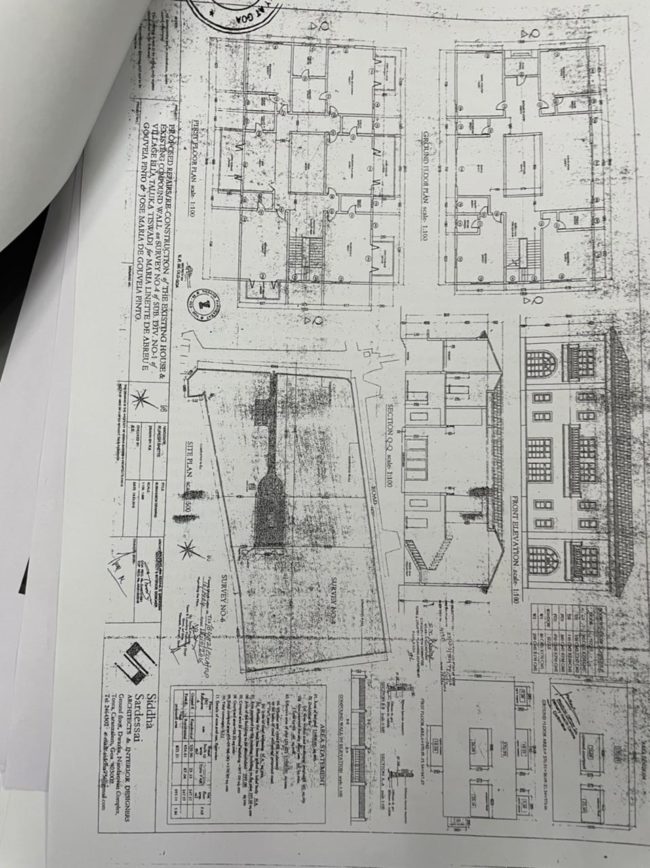 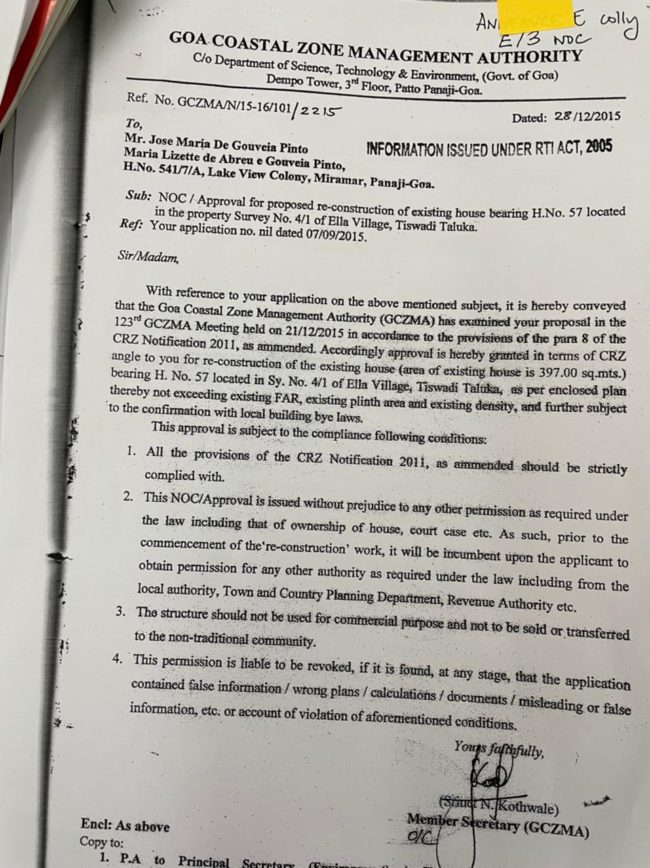 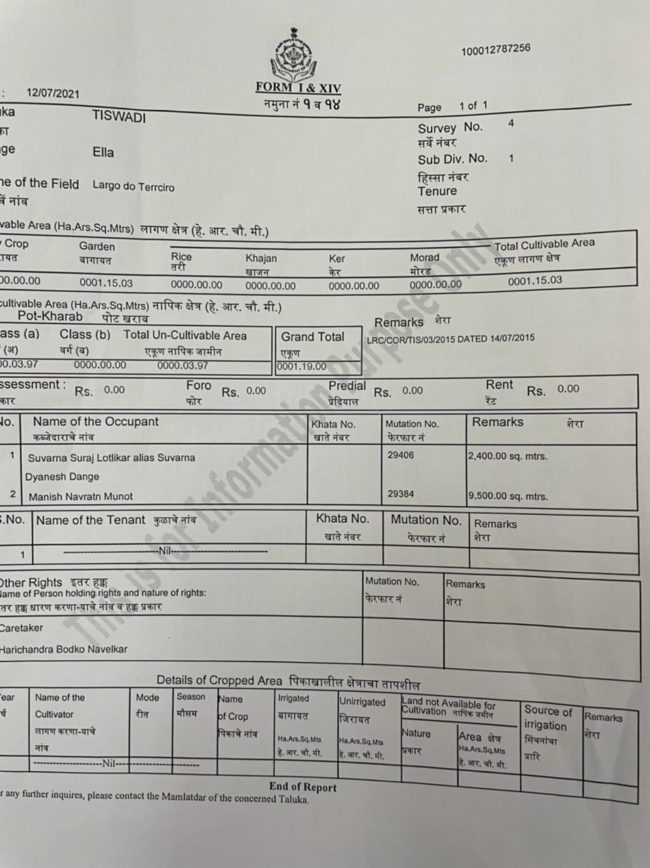 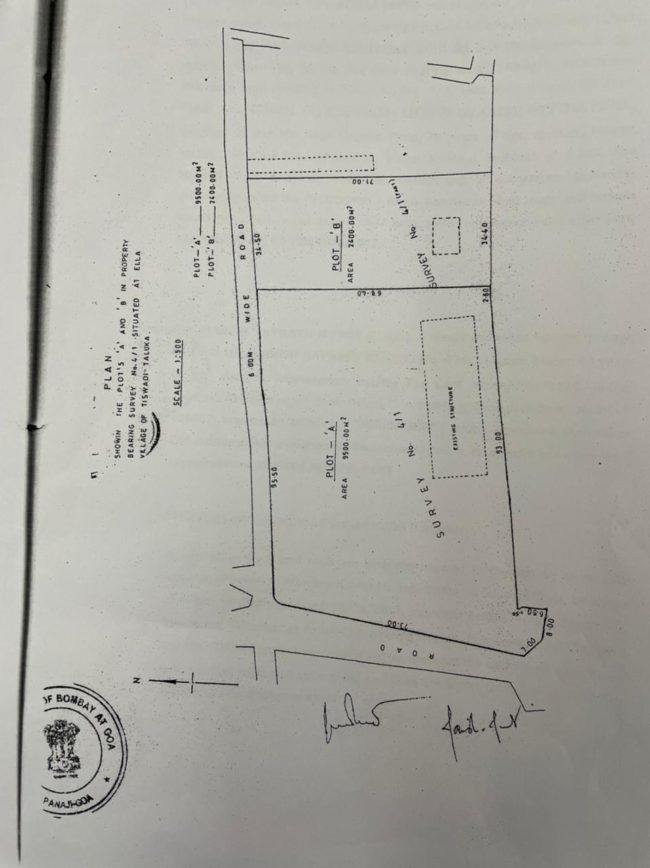 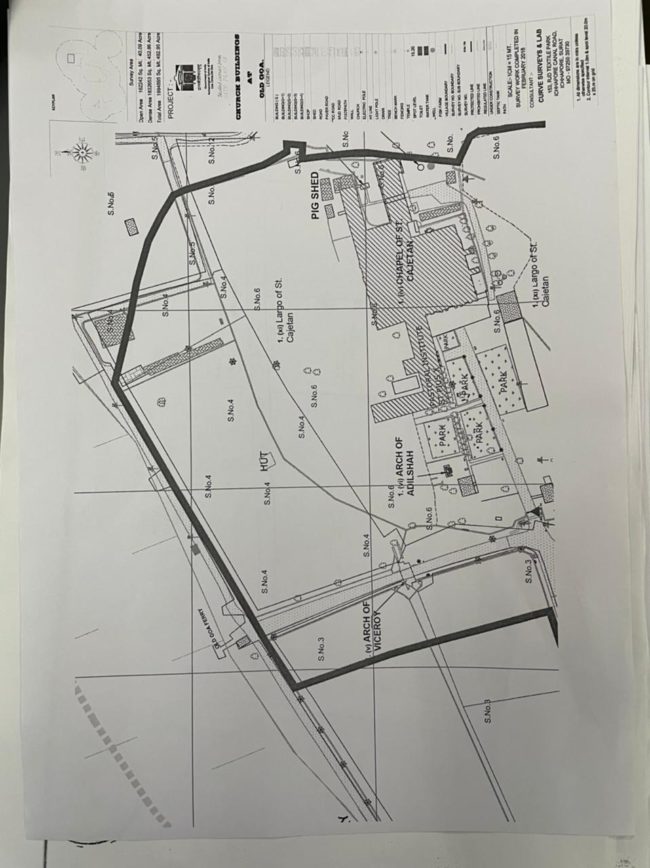 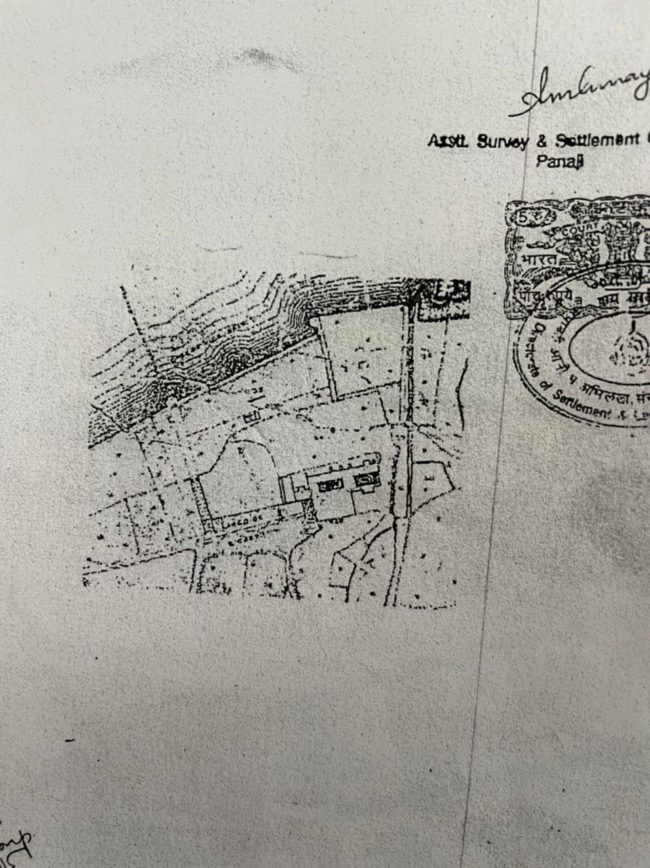 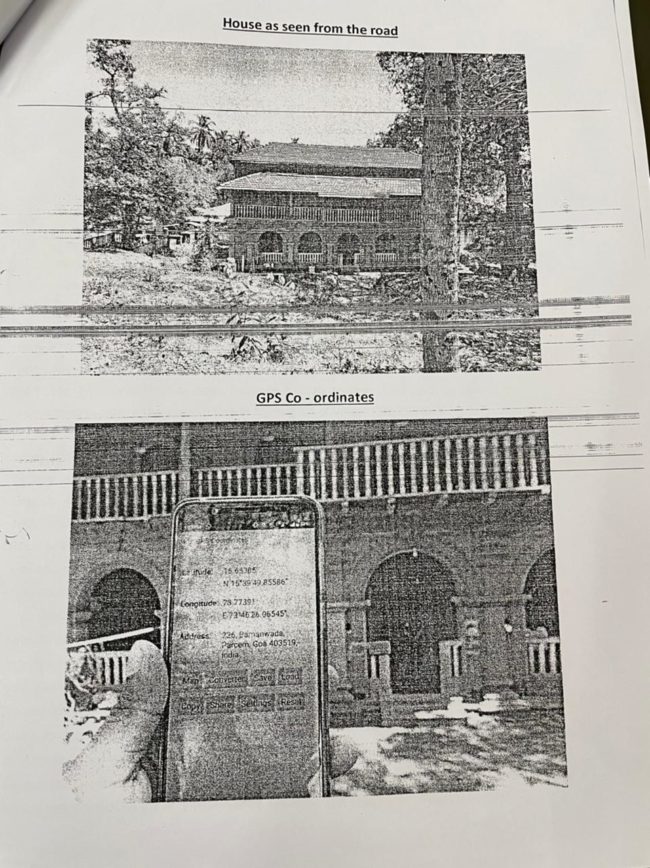 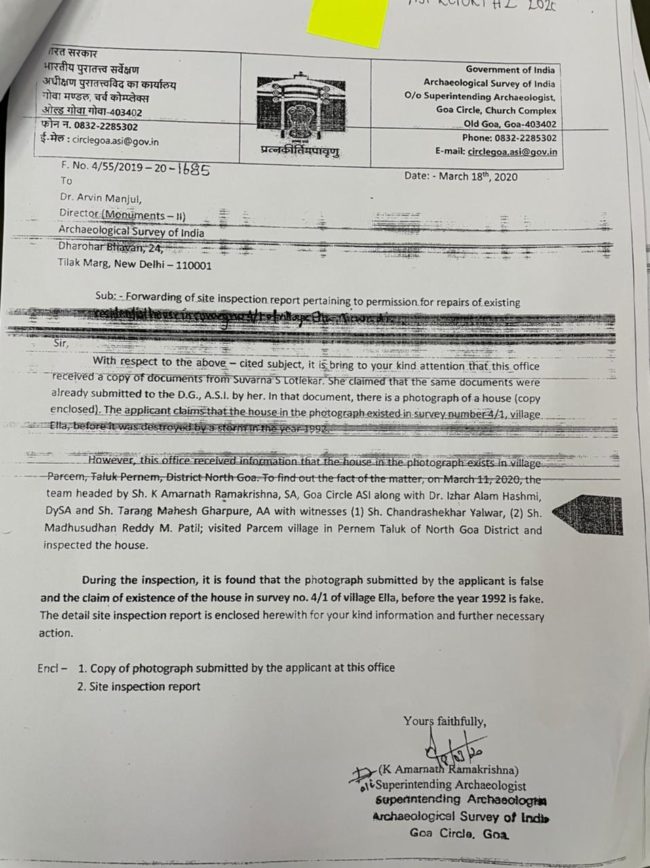 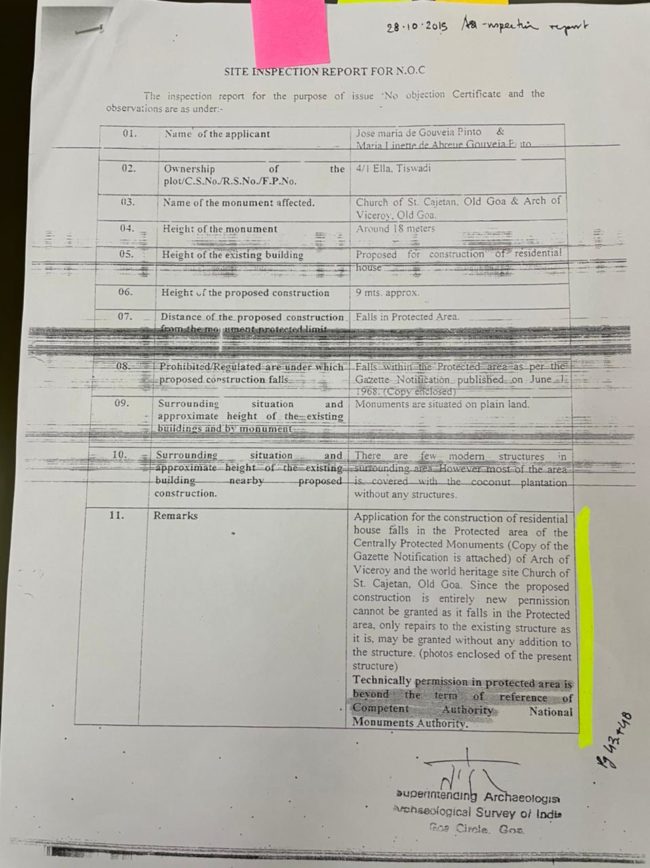 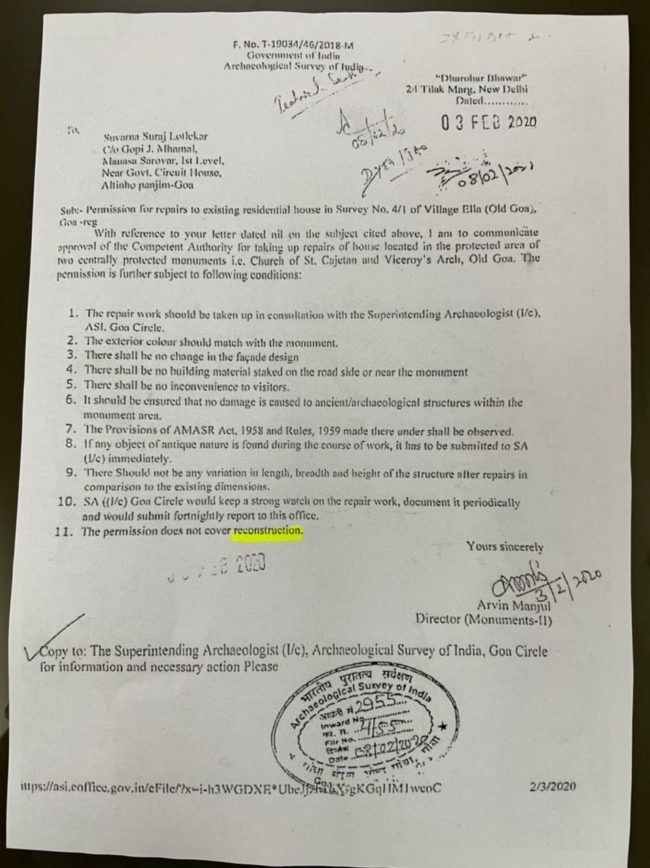