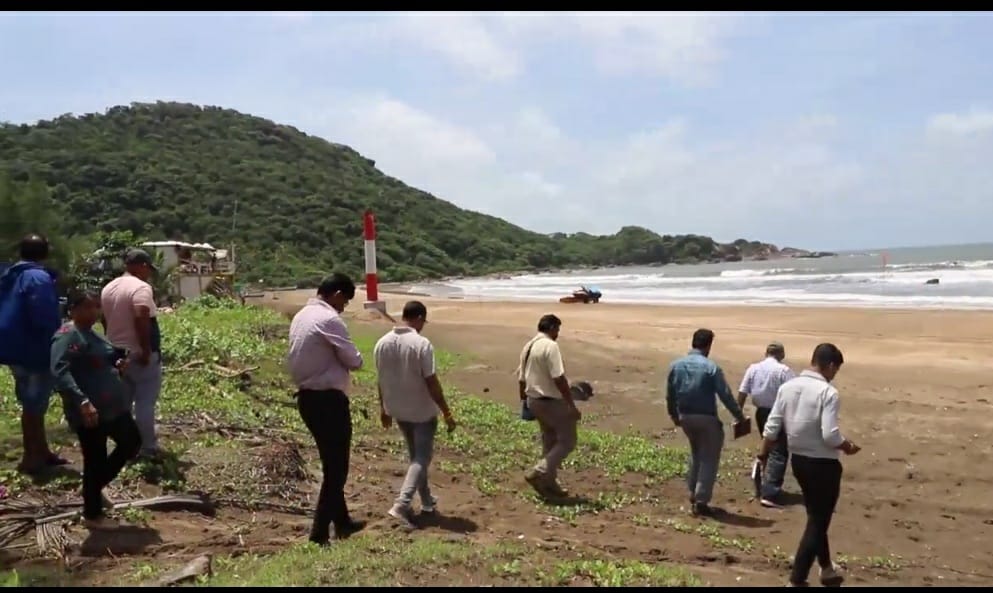 Goemkarponn desk
CANACONA – The government, in its endeavour to improve the tourism sector, an inspection of most of Canacona Beaches was conducted on Saturday.
According to sources, a five-member team of GTDC and Tourism department Engineers and officers, along with a consultant, descended on Canacona beaches on Saturday.
They visited most of the beaches, including Khola, Agonda, Palolem- Patnem, Galgibaga-Talpona and Polem and verified the possibilities of availability of suitable land to set up Changing Rooms, Toilets, Illuminations, Provisioning of Roads/road- expansions, Parking Lots, CCTV Cameras, Beach-Benches, Shed, Beautification, as well as High mast Lamps.
Discussions were held with local bodies regarding the availability of land on respective beach Coasts, and the Tourism team also sought a minimum of 120 sqm of land to provide Toilet and Changing-room blocks, wherever not available, besides exploring possibilities of the setup of High mast Lamps.
When the team visited Agonda, Sarpanch Fatima Rodrigues demanded proper Illumination of the beach and the setting up of CCTV cameras of the 2.8 km long beach Coast of Agonda, besides a beach-approach Road, provisions of Toilet and Changing room.
At Palolem, CMC Chairperson Ramakant Naikgaunkar, along with Dy Chairperson Laxuman Pagui, who is also ward councillor and ward councillor and Ex-Chairperson Simon Rebello, Councillors Sara Naik Dessai, briefed the Tourism team on various aspects of measures/infrastructure needed to make Palolem the most sought beach in the State. Two more Highmasts at Ourem and Monko, besides proper beach illumination, retaining/protection walls of the entire beach stretch are proposed, also sought Multi-Storey Parking and Road Widening works.
When the team reached Poinguinim, Dy Sarpanch Sunil Paingankar, along with other panch-members, led the tourism team to Talpona, where proper Illumination, especially behind the temple and provision of a Shed, besides provision of Toilet Block/Changing rooms, were sought. Later visiting Galgibaga Coast, besides Changing Rooms and toilet block, also demanded a proper road and parking space, and in consultation with Forest department to illuminate the Galgibaga Beach, where forest department is also a Turtle Rehabilitation and Nesting Centre.
At Galgibaga, the team observed providing a High mast lamp is not recommended since the beach is a Turtle Nesting/Reserved Beach,
Lastly, the team reached Polem Beach, bordering the neighbouring Karnataka.
Panchayat team with Sarpanch Pratiza Bandekar, Ex-sarpanchs and Panch Sachin Naik, Ajay Lolienkar, besides Special Secretary to Speaker Ramesh Tawadkar, Santosh Lolienkar, listed out the needs to improve the infrastructure and Beautification of Polem beach.
It was specifically asked to provide Toilet Block and Changing Rooms, besides the Illumination of the beach and provision of a High mast Lamp, and more importantly, the approach road.
The inspection team consisted of GTDC Executive Engineer Kiran Kumar Naik, AE Madeira, JE Ashish Kalangutkar, Department of Tourism I A Sangeeta Mandrekar, while respective Sarpanchas or their Panch’s representing their panchayats were present along with panchayat secretaries.
It may be recalled that Tourism Minister Rohan Khaunte, irrespective of political affiliations, has sought the cooperation of coastal MLAs and Panchayats to improve the Tourism Sector under the Integrated Beach Management Policy of the State.
Stating there’s no ruling or opposition as far as tourism is concerned as it is the mainstay of the state economy, informed the Directors and Officials concerned are given directions to physically inspect the beach areas and resolve problems.