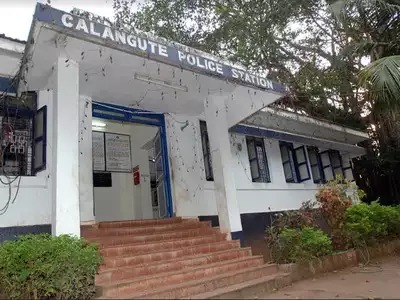 Goemkarponn desk
CALANGUTE: In yet another incident of assault on tourists, the Calangute police arrested two persons for wrongfully restraining and assaulting Tamil Nadu tourists on Baga beach.
According to Calangute police, an offence under section 341, 324, 506 (ii), 365 r/w 34 IPC was registered on Friday afternoon at Calangute Police Station against two unknown accused persons
The accused person wrongfully restrained the complainant and his friend, assaulted them at Baga Calangute around 4:15 am, and followed them on the way to Anjuna.
“Accused thereafter wrongfully restrained complainant and his friend and by putting in instant fear of death, abducted complainants friend on a scooter to an unknown place,” Police said.
Calangute PI Dattaguru Sawant said that Police in swift action, with the help of CCTV footage in and around the crime spot, identified both culprits and traced their possible hideout locations and subsequently nabbed both culprits from Roses Guest House, Muddawaddo Calaangute and rescued victim Manoj Asokan native of Tamil Nadu.
Accused, namely Imran Qureshi, age 28 R/o, Muddawaddo Calangute, a native of Uttar Pradesh and Marshal Cardozo, age 31 R/o.Muddawaddo Calangute was arrested and lodged in lock-up.
Identifying and tracing the accused involved in the abduction of tourist in a few hours was successful due to the efforts of PSI Kiran Naik, Head Constable Vidyanand Amonkar, Constable Manoj Naik, Gaurav Chodankar, Peter Fernandes, Amir Garad, Ganpat Tiloji, Akash Naik.