To be revealed in a phased manner, TKM competitively prices the Urban Cruiser Hyryder 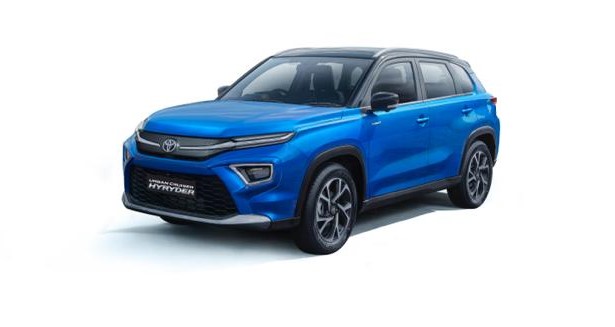 Toyota Kirloskar Motor (TKM), initiated the announcement of the prices of its brand-new Toyota Urban Cruiser Hyryder. To be announced in a phased manner, the top four grades of the latest offering from Toyota are competitively priced between Rs. 15,11,000 to Rs. 18,99,000.

The brand-new SUV was unveiled in early July and the bookings were also announced at the same time. As one of Toyota’s sustainable mobility offerings, the Urban Cruiser Hyryder inherits Toyota’s famed global SUV lineage with bold and sophisticated styling, along with advanced technology features making it a perfect choice for the customers.

Details of the ex-showroom Price (grade-wise), are as follows:

Commenting on the significant milestone Mr. Atul Sood, Associate Vice President, Sales, and Strategic Marketing, TKM, said, “We are truly humbled and honoured to receive such an overwhelming response for the Urban Cruiser Hyryder and we are grateful that our customers have put their faith & trust in brand Toyota. Today, we have decided to announce the price of the Urban Cruiser Hyryder in a phased manner. The prices for the remaining grades will be announced shortly.

The first of its kind self-charging strong hybrid electric vehicle in the B SUV segment, the Urban Cruiser Hyryder is aimed at delivering exemplary performance, best in class fuel efficiency, quick acceleration, connected car features and is designed for a greener future. We have introduced a very competitive pricing for the Urban Cruiser Hyryder, as it is through the Hyryder that we aim to encourage widespread acceptance of environment friendly technologies, thereby creating a positive impact and enhance energy security of the country”, he concluded.

Available in two powertrains- Self-charging Strong Hybrid Electric powertrain & Neo Drive, the Self-Charging Strong Hybrid Electric Vehicle is powered by an e-drive transmission and runs 40% of the distance and 60% of the time on electric power, with engine shut-off, offering a fuel efficiency of 27.97km/l. Additionally, the Neo Drive comes with a 1.5-liter K-series engine, a five-speed manual transmission, and a six-speed automatic transmission with 2WD and 4WD options.