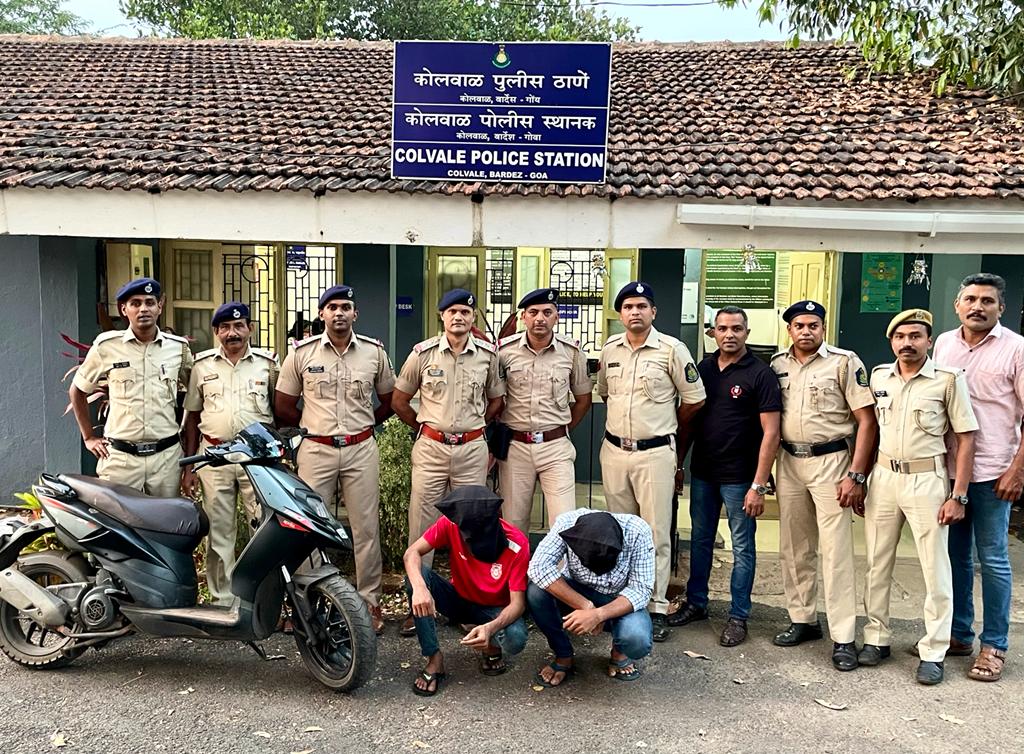 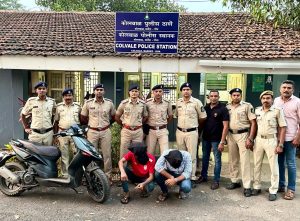 Goemkarponn desk
MAPUSA:
The Colvale Police have nabbed two persons accused in a chain snatching incident from New Vaddem, Vasco.
Police said that on Friday evening, an offence was registered to vide U/s 356, 379г/w 34 IPC, after a complaint of one Evarista DeSouza, w/o Jose Miguel DeSouza, age 52 years, R/o H. No. 100, Ganeshnagar, Assnora Bardez Goa saying that that on November 3, at about 11.45 hours at near Ganesh Temple, Ganeshnagar, Assnora Bardze Goa, while she was proceeding to her residence, unknown male accused rider and pillion rider of black/ grey colour Aprilla scooter snatched the Gold Chain from her neck.
The chain weighed about 12 grams, W / Rs. 100000/- approx.
During further investigation, all the possible efforts were taken to establish the identity of the unknown accused persons involved in the crime.
The available CCTV footage of the accused persons was carefully analysed, and consequently, a lookout notice was circulated across various media platforms.
Further, on 25/11/2022, police received credible information that two persons, namely Ashpak S/o Dadapir Kadur, Age 25 years, R/o Near Santoshi Mata Temple, New Wade, Vasco Goa and Hussain S/o Abdul Rashid, Age 23 years, R/o Near Santoshi Mata Temple, New Wade, Vasco Goa are suspected to be involved in the crime above. Accordingly, the staff of Colvale Police Station, along with the assistance of Vasco Police Station, developed sources and identified the said persons, and after technical surveillance, both the persons mentioned above were located near New Wade, Vasco Goa.
Both were thoroughly interrogated at length, wherein both confessed to their involvement in the commission of the above crime.
The Aprilla scooter used by them during the commission of the crime has also been taken into custody.
Further, both the above-mentioned accused persons were taken into custody and brought to Colvale Police station and formally arrested in the Colvale P.S. Cr. No. 74/2022 U/s 356, 379г/w 34 IPC on 25/11/2022 at 10.57 hrs and lodged in lock-up.
The above-accused persons were produced before the Hon’ble JMFC Court Mapusa and remanded to three days of police custody.
The above operation was conducted under the extreme Supervision of SP, North Porvorim Nidhin Valsan, SDPO, Mapusa Jivba G. Dalvi and PI, Colvale PS Somnath L. Mahajik.
Further investigation is in progress with PSI Kunal S. Naik of Colvale P.S.