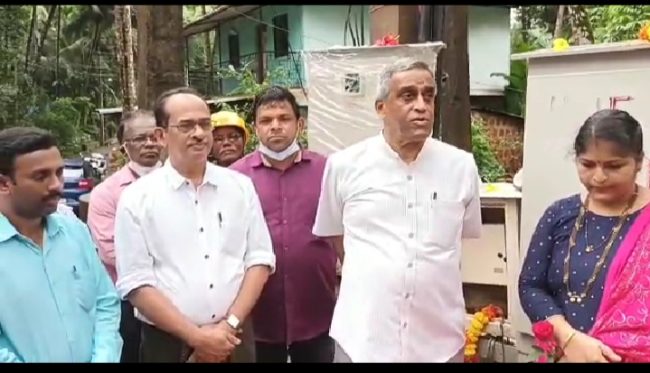 Goemkarponn desk
PONDA: Marcaim MLA and Power Minister Sudin Dhavlikar announced underground cabling at Marcaim Constituency in two phases, costing Rs 32 crore.
He said this step is taken to find a solution to frequent power interruption at the Marcaim constituency, where frequent power failures are caused due to tree felling.
He was speaking to the media, Power Department officials, and locals after the inauguration of 200 KVA Transformer at Gaunem Bandora.
He said tender has been already floated where in underground cabling in the first phase on Durbhat feeder whereas at Part of Kavlem Panchayat at Donkhabm similarly Wadi Talavalim Panchayat and Durbhat Adpoi Agapur Panchayat up to Undir would be done by costing around Rs 13 Crore which would be completed in six month time.
He further said in the second phase, underground cabling at Marcaim, Bandora, and Kundaim would be done by costing around Rs 19 Crore, and the tender would be processed from January to February.