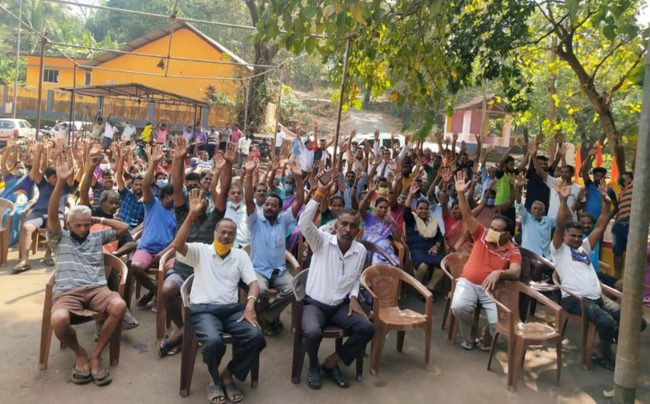 Varkhand (Pernem) – The Special Gram Sabha of the Varakhand Panchayat’s has resolved to oppose the Mopa expressway through Tulaskarwadi.

The people at Gram Sabha resolved to oppose the project and as such maintained that the government should build the project over their dead bodies.

Varkhand Sarpanch Sanjay Tulaskar’s appeal to the villagers to unite and fight this issue without politics.

He said the road going from Dhargal Sukekulan to Nagjar Tulaskarwadi Mopa expressway project is not in the interest of the locals.

“The government should take bulldozer on our bodies before destroying our trees and houses while doing this road,” he said adding that under any condition we will not allow this road.

“The Aerocity project should be cancelled and done in the 20 to 30 lakh square meters of land taken for the airport. Additional land should be returned to locals. Those whose trees were cut should be compensated immediately,” they demanded.