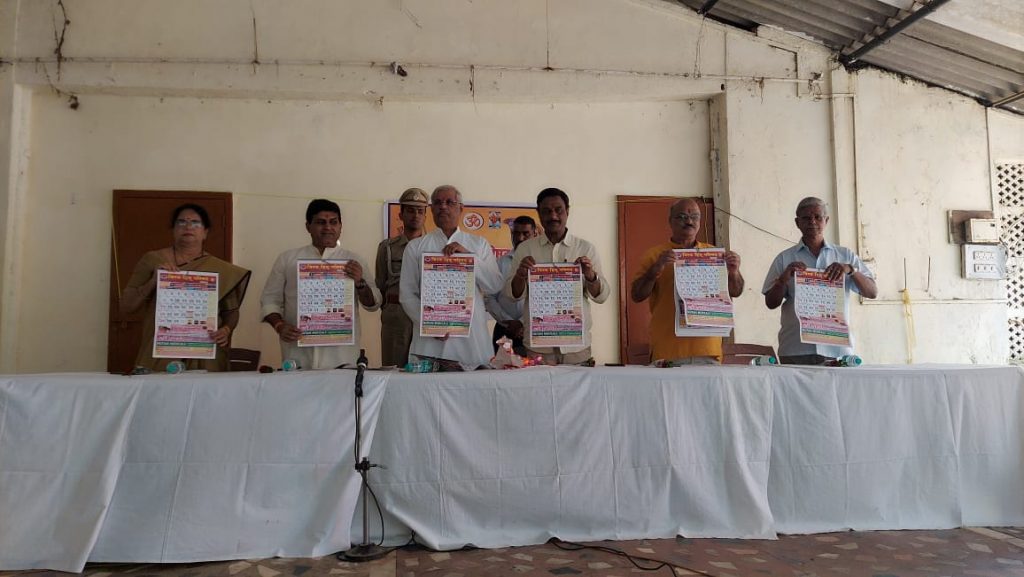 Speaking to media Rajendra Arlekar said VHP was playing a major role in the spreading of patriotism and Indian culture in the masses across the country
” The VHP has been doing this for the last many years since 1964 and they have programs every year at various locations. The VHP Gomantak pranta launches their calendar every year and they have launched the annual calendar today ” said Arlekar

Vasco MLA Krishna Salkar said that it was vital that the VHP calendar reaches out to all the houses
“We have seen that English calendar only shows the date but in Hindu religion we have the ‘ Tithi ” which is very important for taking up any works . The Hindu calendar shows many things like festival dates , jatra dates , sunrise and sunset timings and Hindus believe in timings before taking up any works and this is why I feel that this calendar must reach in evey hindu house ” said Salkar

VHP leader Mohan Amshekar said that Hindus in Goa must unite leaving behind any differences to help Goa prosper
” The Goa and the country can prosper when Hindus begin to unite leaving behind any differences. VHP is an organisation formed to offer services to the people and we want to reach to the remote parts of the entire state to spread our services through various programs” said Amshekar

” We also want to bring tbe youth towards our culture and get them free from addiction of various vices. An organisation by the name of Bajrang Dal has weekly and monthly programs where the youth take the works forward and offer different services to people . Bajrang Dal has also programs in many parts of the state from Mapusa, Fatorpa ,curchorem and even Zuarinagar area ” said Amshekar