Voting on No Confidence Motion against MMC Chairperson on September 23 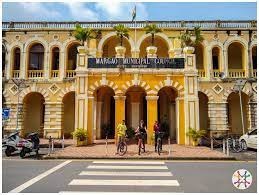 Goemkarponn desk
MARGAO: Margao Municipal Council (MMC) Chairperson Ghanshyam Shirodkar today informed that the voting on the No Confidence Motion moved against him will be held on September 23 (Friday).
“Voting on the No Confidence Motion moved against him will be held on September 23 at 11 am. I have officially received the notice from the Department of Municipal Administration (DMA),” said Shirodkar.
BJP-backed Margao Municipal councillors had moved a No Confidence Motion against newly elected Chairperson Ghanshyam Shirodkar.
They requested the DMA to hold a fresh election to elect the Chairperson and to restrain Ghanashayam from discharging his duties as Chairperson of MMC until the process is complete.
Ghanshyam urged the political leaders of the BJP not to bring their party politics into the autonomous body.
“They need to tell people the reason behind moving the no-confidence motion. I have yet to start my work. No confidence can be accepted if someone fails to deliver,” said the MMC Chairperson.
The application was submitted to the Directorate of Municipal Administration on Monday by 15 councillors. Although BJP councillors aligned to Digambar Kamat had a majority of 16, the BJP-backed Damodar Shirodkar lost the election on Friday.
15 councillors of the BJP-Kamat camp were instructed to move the no-confidence motion against Ghanashyam during a meeting they were summoned to attend by Chief Minister Pramod Sawant and Margao MLA Digambar Kamat on Friday at Panjim.