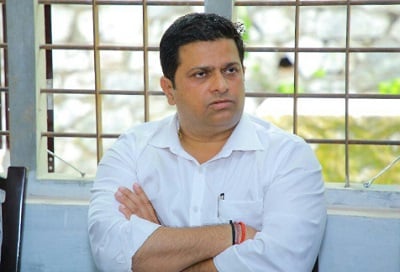 SALEIGAO: Jayesh Salgaonkar, BJP candidate of Saleigao, received an overwhelming response from the people. During his campaigning. Salgaonkar claims to take up football ground basic amenities issues on priority. He also claimed to bring sustainable development to the Saleigao constituency without disturbing its pristine beauty.
The former Minister expressed confidence that he will go through, stating that he has been getting overwhelming response from the people during his door to door campaigning in the constituency.
“Although we are following COVID protocols and avoiding the number of people, constituents are joining me in the D2D campaign,” he says.
Asked about people’s response after he quit Goa Forward Party and, this time contesting on BJP, he said people’s response has been good except for a few, who recently took press briefing and claimed to have more people with them.
“The support lent by the former Minister Dilip Parulekar will play a vital role this time since his supporters are also joining this campaign,” he said.
Taking a potshot on the split away group, Salgaonkar claimed that he has the support of the core cadre of BJP and the senior BJP supporters.
“Those who have split now have roots away from BJP and was with BJP for their interest,” he said.
Further, when asked his opinion on Kedar Naik and Rupesh Naik, who were with BJP before he joined the party and now will face them as an opponent, Jayesh said they were always divided right from the beginning, although they had gone united the platform of Bardez. “Due to this, the party thought that I was a good candidate. There are three factions that are visible. These three factions wanted eleven tickets which the party could not give them. After the survey, it came out that Jayesh was winning, so the party gave me a ticket,” he said.
He further opined that getting elected means not everything, and it should not hit your head, “but I feel getting elected is a responsibility. If you want to know a person’s character, then you should give him power and see. People have seen me in power as a minister and witnessed my character. I am still down to earth to date.”
When questioned about his recent claims about the money power in Bardez, he said media should expose the issue in which flats of Siolim and other places envelopes of money are packed.
He further went on to claim that in the affidavit sworn in by him, Salgaonkar’s income has diminished as compared to last time, and Micheal Lobo’s income, on the contrary, has multiplied 500 times this election, so where it has come one need to question Micheal Lobo” Salgaonkar said.
Later, when questioned about his priorities after getting elected, Salgaonkar said that his main priority would be preserving the Saleigao constituency’s pristine villages.
“I have not allowed any hill cutting or any such development in Saleigao constituency. But on the other hand, Micheal Lobo has converted a land behind Bodgeshwar temple in the Guirim area as a Mapusa Development Plan in which six-seven high rise multi-storey buildings are supposed to come up” he said.
The locals opposed this move, including farmers who wanted their fields to be protected and keep it for posterity. There have been efforts by a few aspirant candidates to bring builder lobbies to sell out the land develop slums.
He further added that he has got good plans for the sustainable development of the Saleigao constituency by giving urban facilities to the rural areas of the constituency.
“My main focus will be to upgrade all the facilities in Saliigao, keeping the pristine beauty untouched,” he said.
When asked what would he do for the ace footballers from Saleigao since they do not have a football ground, he replied, “we had signed an agreement and tendered this project with GSIDC when Parrikar was a Chief Minister. RDA has now made two estimates of this project. So within a month, the one ground from Saleigao and Mollebhar ground will be taken on priority,” he added.
His supporters, including Ramesh Ghadi claimed that people are joining Jayesh looking at his vision, work, and down-to-earth nature.
“We are getting overwhelmed. Response during campaigning,” he said.