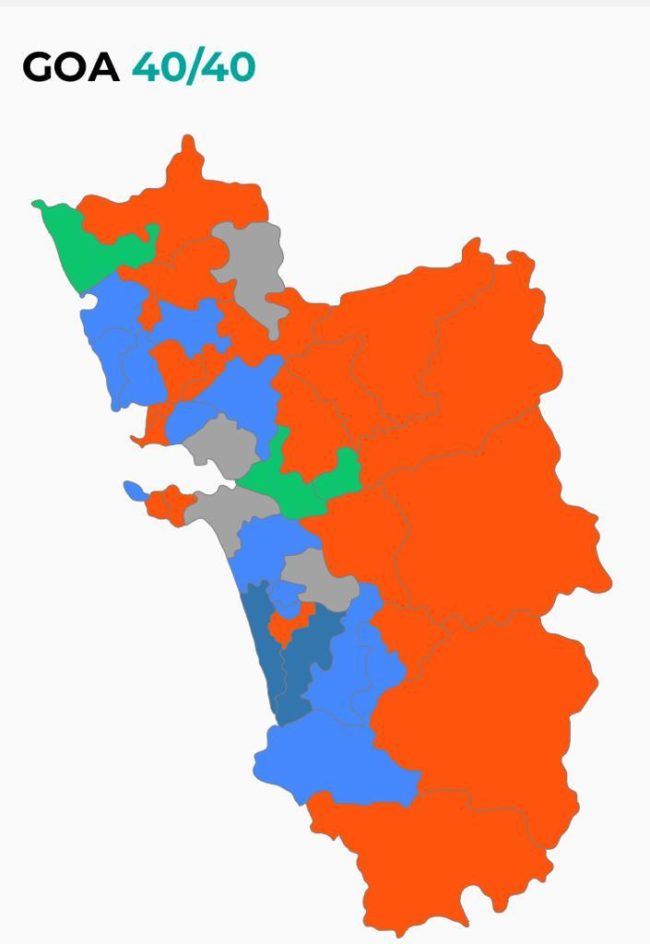 PANAJI: Weeding out the anti-incumbency wave, the ruling BJP-led by Chief Minister Dr Pramod Sawant set to form the next government in Goa for the third consecutive term, as the saffron fold swept the 2022 polls, winning 20 out of 40 seats.
The Goa BJP has scheduled a meeting of all its elected candidates today evening post which they will approach Goa Governor PS Sreedharan Pillai to stake a claim for government formation. The three independent candidates have extended their support to BJP taking the total tally to 23.
While the Congress-GFP managed to get 12 seats, MGP settled for two.
Aam Aadmi Party opened their account, winning Velim and Benaulim. Revolutionary Goans won from St Andre’s seat, the newly formed local front.

The Mamata Banerjee led TMC failed to open the account.
After most exit polls predicted a hung Assembly in Goa, the results surprised everyone, including political parties.
A voter turnout of nearly 79% was recorded in Goa on February 14, as single-phase polling for all 40 Assembly seats in the state ended. Turnout was highest for Sanquelim, from where CM and BJP leader Pramod Sawant is one of the candidates; 89.64% of polling took place here. In 2017, the state witnessed a turnout of 81.21%.
Deputy CMs Chandrakant Kavlekar and Manohar Ajgaonkar faced humiliating defeats in Quepem and Margao’s respective constituencies.

Sitting MLA Churchill Alemao, Milind Naik, Clafasio, and Glen Ticlo faced defeat.
Some ex MLAs had switched sides just ahead of polls like Alina Saldanha, Carlos Almeida, Wilfred D’Sa Filip Neri Rodrigues, Prasad Gaonkar, Isidore Fernandes, Deepak Pawaskar, Jayesh Salgonkar, Francisco Silveria also faced defeat.
Chief Minister Dr Pramod Sawant, who faced huge criticism ahead of Goa polls, said that though his margin of victory in Sanquelim came down, what was important was that he won finally.
“It was my karyakartas who gave me this win by 650 votes. I was busy with the government works as I was still holding charge as CM, they worked day and night to bring this victory,” Sawant said.
The biggest shock for BJP came from Bardez where they lost from Saligao, Siolim, Calangute and Aldona while winning Porvorim, Thivim and Mapusa.

DHS Goa to vaccinate citizens above 60 years, comorbid patients above 45 from March

Goemkaponn Desk PANAJI: Everyone above 60 years of age and those over 45 years with comorbidities will be able to get COVID-19 vaccine from March ... Read More