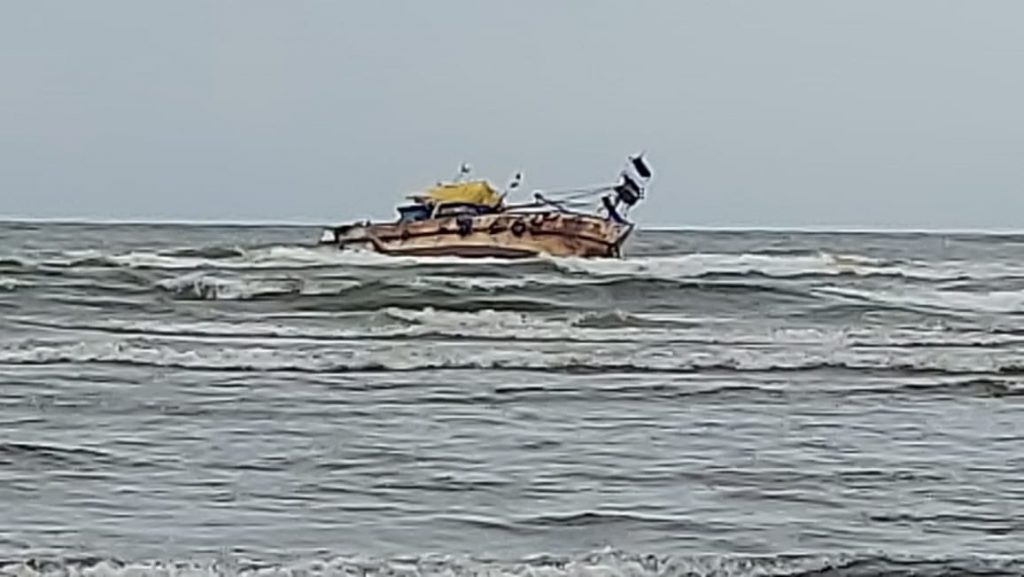 Goemkarponn desk
PANAJI: In the quiet of the night at 10 pm, a trawler manned by 37 fishermen found itself stranded on Miramar beach amidst the high waves. In a late night rescue operation conducted by Drishti lifesavers with the assistance of the BSP all men onboard the stranded vessel were brought safely back to shore.
The trawler is said to have departed from Betim Jetty at sunset. After the interim prohibition on the fishing season was lifted, fishermen resumed their activity in full force.
The commencement of the fishing season has witnessed a large volume of trawlers setting out at sea. Drishti reports that a group of 37 fishermen opted to pursue their catch in the late evening after witnessing favourable weather conditions. While out at sea, the fishermen spotted the trawler’s engine malfunctioning and could not repair it. An individual from the fishing community instantly contacted Shahish and Kamlesh, the captain and lifesaver at Drishti, posted at Miramar beach about the fishermen’s plight. The Lifesavers worked with the BSP (Beach Safety Patrol) Umesh and Sagar to safely return every single fisherman to shore.
The Lifesavers launched into the sea on jet skis in the dead of night to retrieve the marooned men, while the two BSP provided assistance from shore with searchlights to offer guidance in the dark of night and extra hands to ensure the operation was carried out successfully.
The rescue operation, which began at 10 pm, ended at 1 am. While the fishermen were relieved to be rescued from their perilous predicament, the trawler remains at sea, waiting to be taken away by the owners at an appropriate moment.
Drishti’s 400-strong lifesaving force patrols Goa’s beaches all year. Because of the impending monsoons and current weather conditions, red flags have been posted across all beaches under Drishti’s supervision, indicating that these are strictly no-swim zones. Even wading into the water is not advised. The team of lifesavers stationed along the coast is keeping an eye on the weather. The team has been trained to perform rescues even in severe weather.