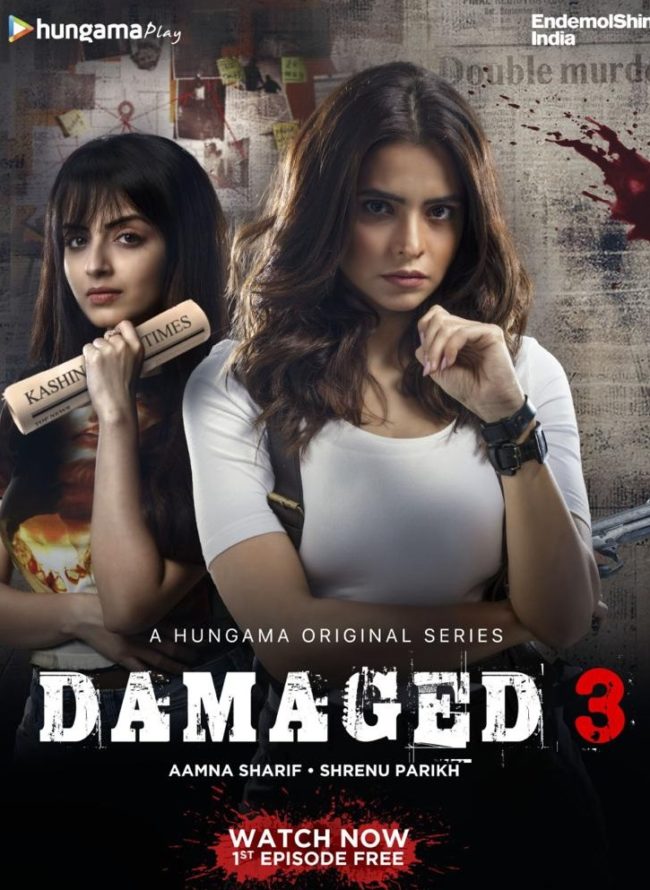 Hungama Play, a leading video on demand platform owned by Hungama Digital Media, launched the third season of its blockbuster Hungama Original, ‘Damaged’. Like the first two seasons, Damaged 3 is a psychological crime drama with a strong female character at the helm of the story. This season features a new story with Aamna Sharif and Shrenu Parikh in the lead. Damaged 3 also stars Pulkit Bangia, Yash Bhatia, VibhutiUpadhaya and Aman Verma. The show is directed by EkantBabani and produced by Endemol Shine India. The show will now be available to stream on Hungama Play and partner networks.

The season follows Rashmi (Aamna Sharif) as a headstrong cop renowned for her courage. As being a cop is known to be a male-dominated profession, Rashmi has broken the glass ceiling to rise the ladder of success to be in a position of power amongst colleagues and people. On the other hand, Shanaya (Shrenu Parikh) is a rookie journalist whose search for a path-breaking story leads her to cross paths with Rashmi. With her story on the female super cop becoming a hit, Shanaya is now ready to go to any lengths to get the next big breaking news. Luckily for her, a spate of serial killings takes place in the town which gives her the sensational news items she needs for her website. From here, what follows is a story filled with twists and turns and an outcome no one thought.

Speaking about the show, Siddhartha Roy, COO, Hungama Digital Media said, “Hungama Original’s Damaged was the very-first original show that we launched, and its innovative storytelling and strong characters were appreciated by the audiences, receiving over a million episodic views. The success of the last two seasons testifies that audiences have enjoyed the show led by an exceptional and new cast. We are certain that the audience will give even more love to both our lead ladies Aamna Sharif and Shrenu Parikh.”

Speaking about the show and her role, Aamna Sharif said, ‘’With the launch of another season of Damaged, it surely says that the audience are now welcoming strong woman characters who are unapologetic. I personally feel the story and representation of the characters are the highlight of the show. The digital platform has changed the way stories are narrated, along with the way actors approach their roles. My character, Rashmi, is a headstrong cop, who is known for her bravery. The audience can expect Damaged 3 will lead to an explosive showdown. I cannot wait for the audience a mix of thrill, horror and some suspense filled show.’’

Commenting on her role, Shrenu Parikh said, “What clicked for me is the story and characters in all the seasons of Damaged. I have been a great fan of the first two season as it combines different elements to present a story that is dramatic. With season 3, the markers of the show have kept the genre of the show adding more nail- biting elements to it.   I play the role of Shanaya, who is a journalist. Her hunger for news and quest for truth puts her in the path of direct collision with Rashmi (Aamna Sharif’s character). I am glad to have worked with Hungama on the show and look forward to the audience’s reactions.”

Elaborating on the show’s concept, EkantBabani, the director of the show said, “The season 3 of Damaged holds the same interplay of psychological crime drama and supernatural. The two highlight of this season is the strong woman character at the centre and secondly it will offer the audience an unconventional narrative with the perfect dose of drama, thrill and horror. It was a pleasure to work with Aamna and Shrenu, both of them are very popular names in Indian Film Industry. I feel fortunate to work again with Hungama. Now, the show is all yours, dear audience.