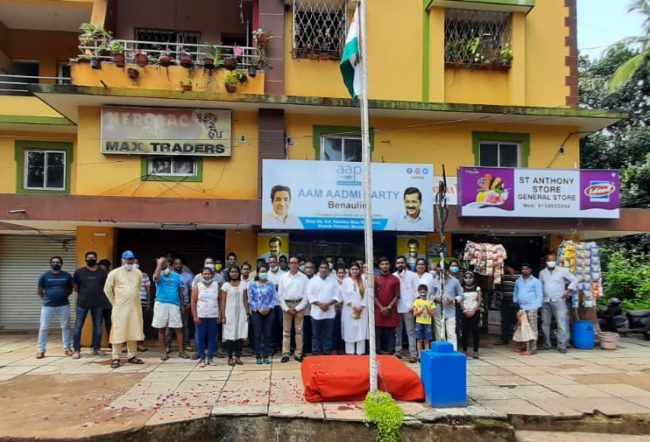 AAP’s Benaulim office was opened to help the residents of Benaulim connect better with the party. Team AAP has stood firmly by the residents by helping them during the CZMP movement, going door to door to provide residents with ration, fogging & even working with the large number of seafarers of Benaulim.
AAP Goa teams in Benaulim also participated in beach cleanliness drives in the early hours of the day. Residents of Benaulim had recently complained that the beach was getting dirty as a result of lack of facilities. AAP Goa Leader Captain Venzy Viegas led AAP’s team which joined in the efforts of local residents.

“While today is the day India received freedom, we all have to unite today and fight against the corruption gripping our country” said AAP ZP Hanzel Fernandes.
“All those freedom fighters who fought for this day, we salute them! And we take it as our duty to work towards their ideals” said Captain Venzy Viegas AAP Goa Leader. “I would also like to wish a Happy Feast of Our Lady of Assumption to everyone” added Viegas