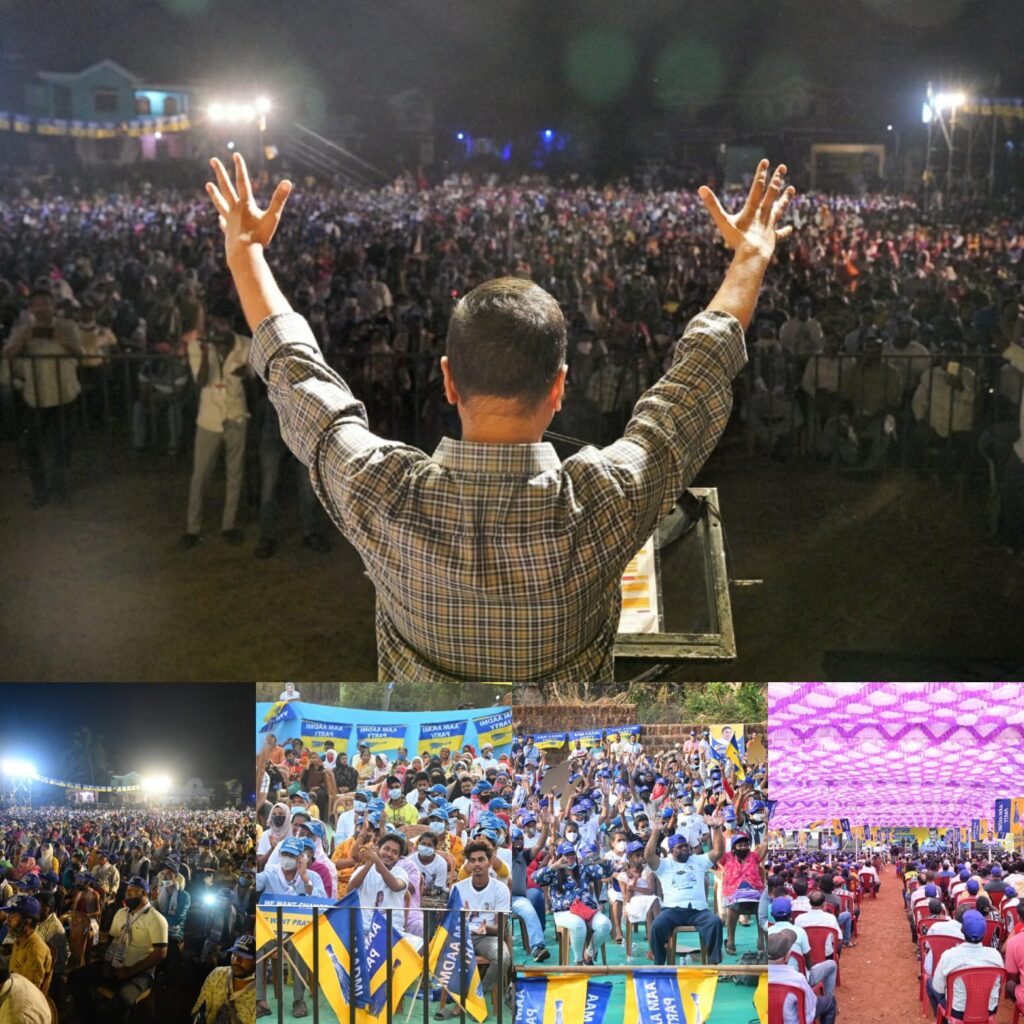 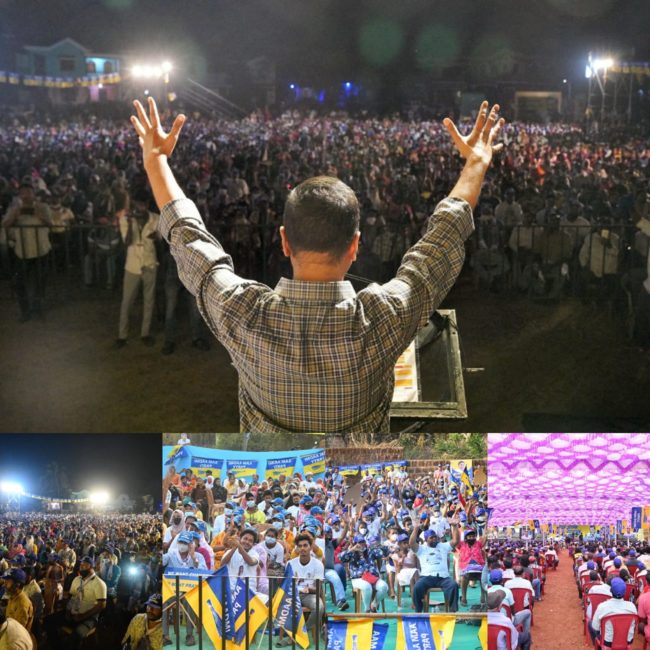 Delhi chief minister and Aam Aadmi Party national convener Arvind Kejriwal appealed on Friday to the people of Goa to stop supporting conventional parties, which contest successive elections solely to fill their coffers, and give a chance to a party with a proven record of service to its people.

On the second day of his two-day visit, Kejriwal addressed massive Jansabhas in Shiroda, Benaulim, Navelim, Cortalim and Velim, where the party received tremendous support.

Addressing the Jansabhas Kejriwal hit out at the ruling BJP and the opposition Congress, saying that Goa’s state of affairs will remain unaffected no matter which party forms the government. “The Congress governed for 27 years, while the BJP ruled for 15 years. If you give them five more years, nothing will change. Give AAP one chance,” Kejriwal said.

Continuing to attack the BJP and the Congress, the Delhi chief minister said Goa had to incur a debt of Rs. 24,000 crores due to their failed governance. “If you vote for them again, the state’s debt will increase to Rs. 50,000 crores within five years and then to Rs.1 lakh crores”, he said. He promised that his party will pay off the entire debt and will make the state profitable.

Kejriwal assured the Goans that, if his party fails to perform, they can vote it out the next time. Furthermore, he stated voting for the Congress as voting for the BJP. “Both of them have an agreement that one of them stays in power for five years and the other one for the next five years. Both have an agreement that one party gets to loot people for once and the other party gets a chance to do the same next time. Delhi had given a chance to AAP, I want Goa to give us a chance. You will forget about other parties,” he added.

He said that BJP and Congress have no agenda for Goa’s development or for upliftment of Goans. BJP Government’s Ministers have been tainted by accusations of job scam, power scam, labour scam, ventilator scam and sex scandals.

He appealed to voters and said, “Don’t let the votes get divided this time; trust us and give a chance to AAP. When the AAP Government is formed every family will get a clear benefit of 10 lakh rupees in five years. AAP Government will provide free electricity-water, free healthcare, free pilgrimage, unemployment allowance of Rs. 3000 and monthly allowance of Rs. 1000 to every woman above 18”.

Adding he said, “I am not talking in the void. We have already done in Delhi what we are promising to do here. We have given good government schools and hospitals in Delhi and we will do it here too”.

AAP Shiroda candidate Mahadev Naik said, “Subhash Shirodkar, who switched from the Congress to the BJP in the name of development, what did he accomplish in five years? He only worked for his own development and looted the Shiroda people. He had promised 200-300 jobs before joining the BJP. Shiroda youth have been betrayed by him for the last five years. This election is crucial, and people have two options, which is to vote for a candidate working for the betterment of Shiroda or to vote for a candidate who is self-driven”.

AAP Benaulim candidate Captain Venzy Viegas said “As the Benaulim business community has tired of ‘Haftagiri’ and ‘Dadagiri,’ I promise them that if AAP is elected I will create an environment that is conducive to business. The Seafarers bring a lot of revenue to the country, but this is forgotten once they retire. During Covid, many seafarers lost their incomes, yet they received no compensation. I will ensure social security schemes for the Seafarers, if AAP elected to power”.

AAP Navelim candidate Pratima Coutinho said, “The price of gas cylinders has gone up to a thousand rupees while petrol has gone up to 100 rupees. Goans now have electricity and water bills of 5000 rupees each. In contrast to Congress and BJP, who are working for self-development, AAP is a party of common people and always strives to resolve the plight of the common people”.

AAP Cortalim candidate Alina Saldanha said, “AAP has transformed Delhi in just six years. Health and education infrastructure have been developed with the latest technology. The best thing about Delhi’s modern schools and health care is that it caters to the common people. AAP provides free electricity, water, education, and medical services to the Delhites. By eliminating corruption, they are returning taxpayer money through free services. We desire the same kind of governance in Cortalim. I urge people to vote for AAP for good governance”.

AAP Velim candidate Cruz Silva said, “The other parties were fighting over tickets early this month, while AAP was busy outlining the vision for the constituencies. Filip Nery Rodrigues who switched from the Congress to the BJP in the last election in the name of development failed to provide health care. Besides preserving my constituency, I will ensure the betterment of the youth. I intend to start Mohalla clinics in every village within a radius of 3km as well as a 50-bed medical facility in Velim”.