BABUSH EXPLODES: Govt jobs are given only in places like Sattari

Claims CM did not hekp him give jobs to Panjimites 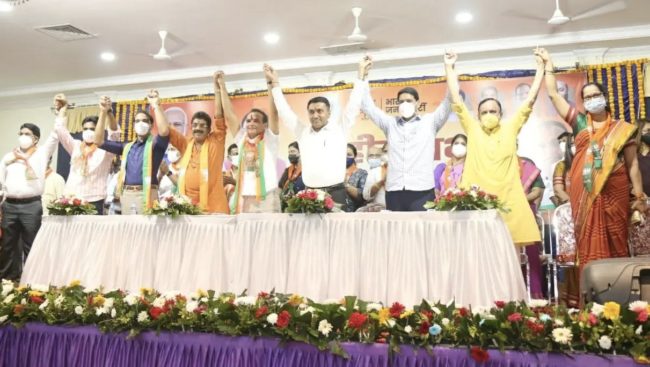 PANAJI: Amidst the raging recruitment scam controversym Panaji MLA Atanasio Monserrate openly said that Chief Minister Dr Pramod Sawant did not help him in giving jobs to the people of Panaji.
Babush was speaking at the karyakarta meeting in the presence of Chief Minister Dr Pramod Sawant.
“CM Sawant has cooperated on development works, but he did not help us in giving jobs in Panaji unlike
Vishwajit Rane, who got full jobs in both the constituencies of Sattari taluka,” said Babush Monserrate.
Babush further said that he had come to BJP to stay.
“I have come to my nest, my home. I will be here permanently,” he said. Stating that CM has helped him as regards all developmental works except employment,” Babush said
He added, “Employment, you are not helping me.” Govt jobs are given only in places like Sattari.
Meanwhile, CM Pramod Sawant exuded confidence that Panaji MLA Babush Monserrate would win in Polls 2022 and assured Babush of the same with his signature dialogue ‘Bhivpachi garaz na’.
The Chief Minister also claimed that no other party has a candidate to fight against Babush.

Goemkarponn desk VASCO: In a shocking development, a lady from Chicalim, identified as Nimisha Gone, around 36-year-old, allegedly killed her own 14-month daughter at her ... Read More