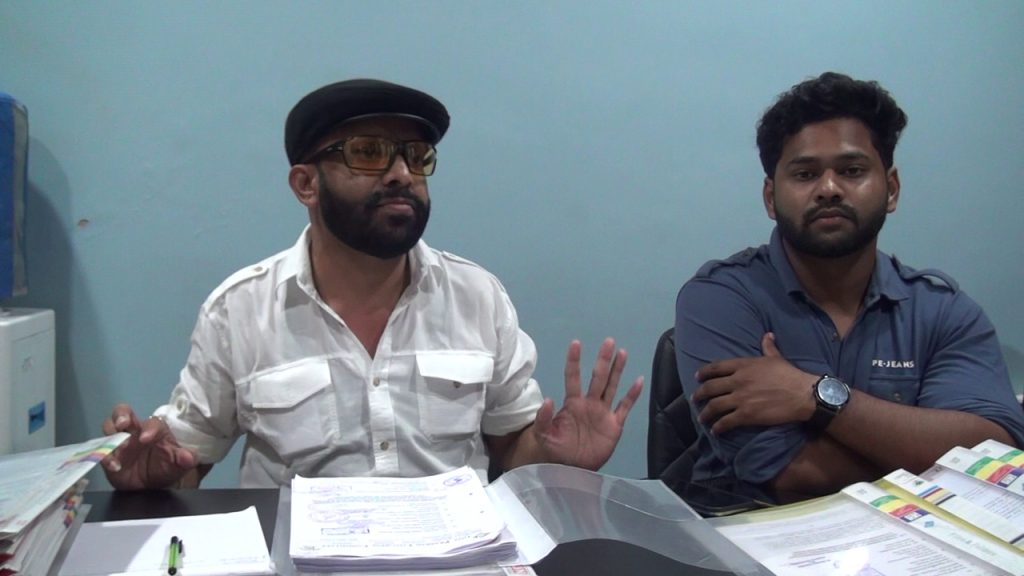 Goemkarponn desk
CANACONA: Alleging he has been rebuked by GLA Speaker and Canacona MLA Ramesh Tawadkar, GPCC General Secretary Janardhan Bhandari dared BJP to refrain from harassing people for raising issues of public concerns. Accusing Goa Legislative Assembly (GLA) Speaker and Canacona MLA Ramesh Tawadkar of abusing him for demanding repairs of Canacona roads before the visit of the President of India to Canacona in December, Congress leader Janardan Bhandari said Speakers’ high-handedness cannot stop him or anyone else from raising people’s issues.
Addressing a hastily called press conference at Chaudi late Thursday evening, Goa Pradesh Congress Committee State General Secretary and 2022-Assembly Elections Canacona candidate Janardhan Bhandari informed Speaker Ramesh Tawadkar in a mobile call called him into his office at Chaudi on the pretext of discussing a matter concerning the development of Canacona, and began to question and counter him on his submission of a memorandum demanding repair of various dilapidated roads in Canacona including the internal road (From Partagal to Amone (Lokosthav site).
“Anticipating the Speaker call him for discussion on Vision Canacona-2030( for which he twice called me for my participation), I reached his office quickly as I was already in the town, while I spoke to him on the phone.
‘How dare you take up the issue of repair of roads, especially the road to Lokosthav (Amone) from Partagal. I am organising Lokosthav; I am bringing the President of India to Canacona. Why and how does it matter to you? Why did you make the demand?’, Bhandari quoted how Tawadkar snapped him by these words in his office.
‘Taken aback by his sudden threats, I told him calmly that I have been following up and submitting memorandums and representations not only for repair and hot mixing of roads but on various other issues. I told him I was not doing this only now but for almost 35 years. Rashtrapati is coming to our Canacona, and it is a matter of pride to all of us, and it is all of our responsibility to see her take back happy memories of Canacona. I don’t know if he took me as his Karyakarta, than suddenly someone else present there began to accuse me of trying to take the credit for the President of India visit to Canacona. This and other allegations made me angry, and almost in a fit of rage, I banged my first into the wall, threw down the file I was carrying on the floor and walked out. I saw a camera recording the episode planted on purpose to instigate me. But I am least concerned.
‘I have seen many MLAs since Vasu Paik Gaunkar, Sanjay Bandekar, Vijay Pai Khot and our Ex-Dy Speaker Isidore Fernandes, during whose time I have been submitting Memorandums or taking up people’s issues with the government. These elected representatives have not only appreciated but even thanked me for having raised the issues. They were able to achieve them. And here this man feels he is everything and everything is his!’ The Lokosthav says he is organised on public money. It is our money, The President of India is neither only his nor his Party president, The President of India, and we every one have a proud feeling to see her visiting our Taluka.”