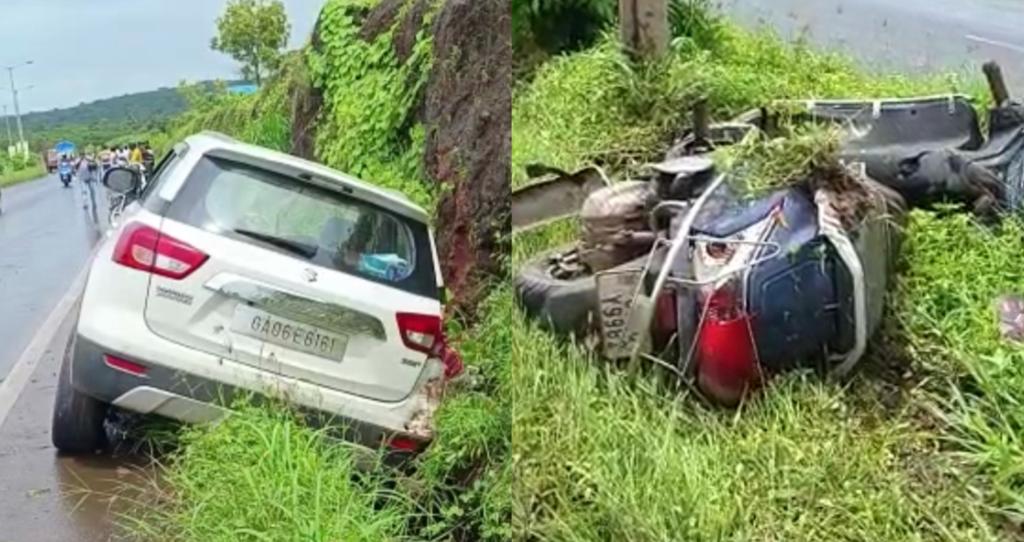 Goemkarponn desk
VERNA: In a major accident was reported between a Breezza car and an Activa scooter on Saturday morning near Blueberry Hall along the Verna Highway.
According to sources in Verna police, both the vehicles were moving towards Verna from Vasco when the speeding Breeza Car (GA06E6161) may have lost control and dashed against the Activa ( GA06Y9982 ) bike, and the bike was flung to the other side of the road.
The bike rider has been grievously injured and shifted to the South Goa district hospital.
Speaking to reporters, social activist Preetam Queloscar urged people not to drive rashly and negligently.
“Both the vehicles were moving along the same route towards Verna, and people say that the bike was hit while overtaking and the bike rider had been grievously injured in the accident. We have seen that almost 5 to 6 accidents are reported per day, some of which are fatal and lead to the death of some rider or driver. The people must drive systematically and avoid driving rashly and negligently so that such incidents don’t happen,” said Queloscar.
Verna police are conducting a further investigation under PI Diago Gracias’s supervision.
Meanwhile, in yet another accident reported on Saturday morning, a speeding car is believed to have crashed on an electricity pole at Gandhinagar along the Shantinagar- Varunapuri Highway in the wee hours of the day. However, it was not known whether the occupants of the ill-fated car sustained injuries in the accident.